Sarah Williams near her home in Springfield, Ore., June 28, 2020. (Ricardo Nagaoka/The New York Times) Economists, business leaders and labor experts have warned for years that a coming wave of automation and digital technology would upend the workforce, destroying some jobs while altering how and where work is done […]

Economists, business leaders and labor experts have warned for years that a coming wave of automation and digital technology would upend the workforce, destroying some jobs while altering how and where work is done for nearly everyone.

In the past four months, the coronavirus pandemic has transformed some of those predictions into reality. By May, half of Americans were working from home, tethered to their employers via laptops and Wi-Fi, up from 15% before the pandemic, according to a recent study.

The rapid change is leading to mounting demands — including from typically opposing groups, like Republicans and Democrats, and business executives and labor leaders — for training programs for millions of workers. On their own, some of the proposals are modest. But combined they could cost tens of billions of dollars, in what would be one of the most ambitious retraining efforts in generations.

“This is the moment when we should make a significant public investment,” said David Autor, a labor economist at MIT, “when we should have a Marshall Plan for ourselves.”

A group of mainly corporate executives and educators advising the Trump administration on workforce policy called for “immediate and unprecedented investments in American workers,” both for training and help in finding jobs. And even before the pandemic, former Vice President Joe Biden had proposed investing $50 billion in workforce training.

In Congress, there is bipartisan support for giving jobless workers a $4,000 training credit.

The Markle Foundation has proposed federally funded “opportunity accounts” of up to $15,000 for workers to spend on training. Union leaders have helped the administration in an effort to expand federal apprenticeship programs to a wide range of industries.

Past downturns have brought increased government aid for workers and training programs. But labor experts say they have tended to be policies that recede once the economy recovers, as happened after the 2008 financial crisis, rather than becoming national priorities.

“The Great Recession was a lost opportunity,” said Lawrence Katz, an economist at Harvard University. “Now, are we going to take this moment to help low-wage workers move into the middle class and give them skills to thrive? Or are they just going to go back to low-wage jobs that are dead ends?”

In the coronavirus economy, companies are adopting more automation, as they seek to cut costs and increase efficiency. There is debate about which jobs are most at risk and how soon. But climbing up the skills ladder is the best way to stay ahead of the automation wave.

Middle-class jobs in today’s economy often require some digital skills but are not considered tech jobs. Data scientists at LinkedIn, a Microsoft subsidiary, recently mined millions of job listings to identify 10 occupations most in demand in recent years and likely to remain so. The list included project manager, sales representative, customer service specialist and graphic designer — nontech jobs that have been transformed by technology.

Researchers at the Markle Foundation, in a report published last year, studied the pace of digital tools moving into occupations during the previous decade. The fastest rates of digitization were in jobs in retail, warehouses and health care. So a training path might be to help a home health worker acquire the skills to become a medical technician.

Job training in America has often been ineffective, with programs shaped by local politics and money spent according to the number of people in courses rather than hiring outcomes. The United States also spends less than other nations on government employment, training and other labor services. As a percentage of economic activity, Canada spends three times as much, Germany about six times more and Scandinavian countries up to more than 12 times as much, according to the Organization for Economic Cooperation and Development.

But there are encouraging pockets of success in America. Some are nonprofit programs like Year Up, Per Scholas and Project Quest, which prepare low-income adults for higher-paying careers in technology, health care, advanced manufacturing or business. In recent months, these programs have quickly changed to online teaching and coaching from in-person programming.

In addition, online training on learning networks like Coursera and Udacity and at digital-only institutions like the Western Governors University, experts say, can be engines for upgrading the skills of many workers in America.

Two years ago, Tony Boswell, 50, decided it was time for a career change after 14 years as a long-haul trucker. He held $100,000 in loans on his truck and trailer, and then his engine blew and he put the $23,000 repair bill on his credit card.

“I figured I had to do something else,” Boswell recalled.

At home in Kansas City, Missouri, when his truck engine was being rebuilt, he applied for a Google scholarship to pay for a three-month course in software development on Udacity. Boswell got the scholarship and then another one for a six-month Udacity program to become a website programmer, saving him the $1,800 cost of the courses.

Through days and nights of effort, Boswell mastered the digital tools of his new field. Today he works for a software development company in Kansas City. He makes nearly $60,000 a year, substantially more than he netted most years as a truck driver. “I have a life now,” he said, “and a future.”

Nearly 15% of people earning bachelor’s degrees in nursing in the United States last year graduated from Western Governors University, an online nonprofit university focused on working adults who want to learn new skills. Sarah Williams was one of them.

For Williams, a 38-year-old working mother of three, the online program was the only realistic option.

Wrestling with college-level statistics and organic chemistry was daunting. But she made it through in eight months, with frequent encouragement and help from her mentor. “No way I could have done it alone,” Williams said.

The vital role of human assistance, delivered in person or online, by a mentor or coach is a common thread in skills-building success stories. Another essential element is employers being engaged as participants in worker training.

The Trump administration is an enthusiastic proponent of expanding the apprenticeship concept beyond the construction and building trades. In March, the Labor Department announced Industry Recognized Apprenticeship Programs to foster apprenticeships in sectors like technology and health care. As a first step, it has called on businesses to form standards-setting bodies for apprenticeships in their industries.

Ivanka Trump, a chair of the administration’s American Workforce Policy Advisory Board, is an advocate for broadening apprenticeship opportunities and making Pell grants, for low-income students, available for noncollege skills training and job certification programs.

The administration sees the government’s role as working with the business community and ensuring that the public system of state and local workforce boards, which receive federal funding, are attuned to hiring demands of the private sector.

“Re-skilling very much needs to come from business,” said John Pallasch, assistant secretary for employment and training at the Labor Department.

Companies, labor experts say, will need to increase their investment in enhancing the skills of their own workers. Analysts say the overall trend has been stagnant or declining for years.

The companies that have increased spending recognize training as a competitive necessity. Exelon, a utility holding company, whose operations serve 10 million customers in the mid-Atlantic and the Midwest, decided it needed to make better use of all of the data streaming off its power generators and grid.

In 2018, Exelon began an in-house education program for its managers and engineers. The goal was to use data to cut costs, improve energy efficiency and curb pollution. By now, 1,200 Exelon employees have participated in the program for general knowledge, while more than 100 have gone on to acquire new technical skills.

Jeffrey Swiatek, 41, altered his career path after years as a maintenance engineer at Exelon. “The engineering paradigm has shifted,” said Swiatek, who had been trained as a mechanical engineer. “We have all this data now.”

Over several months, Swiatek took seven courses on Coursera, learning the coding language Python, as well as the basics of machine learning and data visualization. He got a half-day off each week, but still had his regular job. Mostly, he did the coursework on nights and weekends.

Swiatek has used his new skills to write software that can help predict when equipment needs maintenance — technology that is projected to save the company $1 million over eight years. In December, Swiatek became a principal quantitative engineer, a promotion with a raise, broader responsibilities and brighter career prospects.

Exelon calls its approach to training “co-investing” — the company contributes, but the employee acquires new skills largely on his or her own time. If Swiatek departs for another company in a few years, the investment still probably pays off for Exelon.

But the mobile labor force is one of the central issues in corporate training: The company that invests in a worker’s training may not reap the benefit. To offset that risk, one proposal is to offer tax credits to companies for money spent to upgrade the skills of their workers.

“There are various ways to do it, but ultimately you are going to need public investment,” said Erik Brynjolfsson, an economist and director of the Digital Economy Lab at Stanford University. “Training is not something that can be just left to the private sector.”

This article originally appeared in The New York Times.

Connecticut preparing for all schools to open, but state planning for online education if COVID-19 surges. Final decision will be made in a month, Gov. Lamont says.

Mon Jul 13 , 2020
Connecticut is preparing for three different scenarios for the opening of schools and a final decision on how education will look will be made in a month, Gov. Ned Lamont said Monday. Educators and the state are planning for all learning to take place in schools, but that could be […] 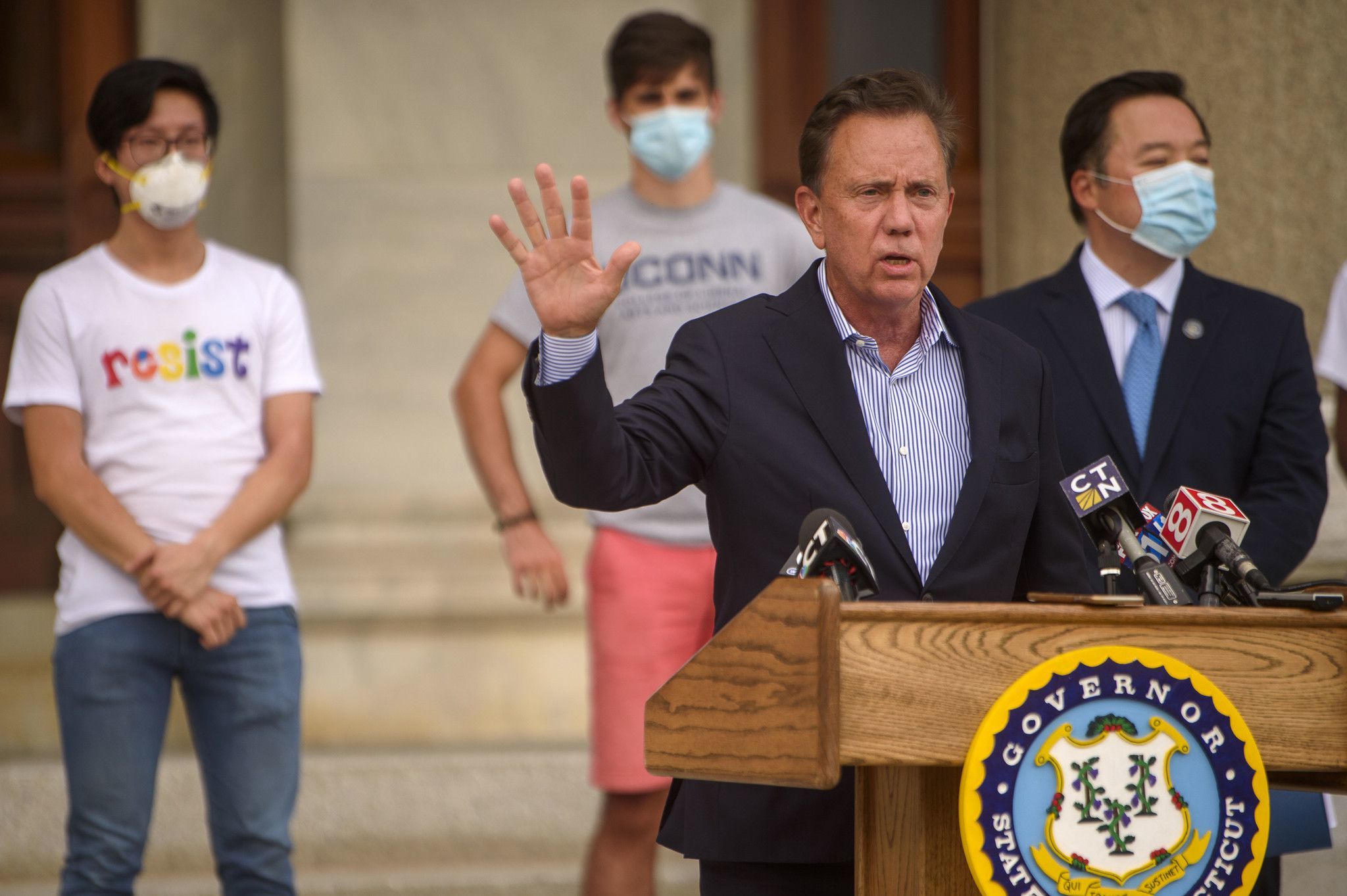