Leslie David Baker, known for his role as the grouchy Stanley Hudson on the hit NBC comedy “The Office,” is no stranger to racist attacks online. But the actor found himself on the receiving end of a particularly vicious tirade after launching a Kickstarter campaign to fund a pilot for […]

Leslie David Baker, known for his role as the grouchy Stanley Hudson on the hit NBC comedy “The Office,” is no stranger to racist attacks online.

But the actor found himself on the receiving end of a particularly vicious tirade after launching a Kickstarter campaign to fund a pilot for an “Office” spin-off called “Uncle Stan.”

“We’re living in an age in time where there is this movement,” Baker tells USA TODAY. “We would have thought that these issues would have been rectified years, decades ago. They have not. As a matter of fact, they’ve gotten worse.”

Instead of ignoring the hateful words, Baker says he found a place where they might make a positive impact: On his Instagram page for the world to see.

“You cannot fight racism and combat those types of stereotypical attitudes if you pretend that they don’t exist,” he says. “All too often in America, people have been so concerned about being made to feel uncomfortable, because they aren’t confronted by racist behavior.”

Baker adds he hopes that his social media post shows people that racism hasn’t gone away – it has moved online.

“It’s not riding down the street in the hood with the burning cross, but instead it’s been replaced with the new technology,” he said. “We think that the old photographs that we see of people being persecuted on the way to school in the South and trying to vote in the ’60s, we think that all of those people have died out. They haven’t died out. They got married. They had children. They had grandchildren, great grandchildren. But they took those beliefs with them, and in many cases, they have not altered those beliefs.”

Since his post, Baker has shared messages of support from fans on his Instagram Stories and says many of his “Office” co-stars, including Rainn Wilson, Jenna Fischer, Angela Kinsey and Kate Flannery, have either reached out to him privately or expressed support publicly on social media.

But he says reactions to his post overall have been mixed, with some accusing the actor of perpetuating racism by exposing it.

“That’s like blaming somebody who gets mugged for being mugged and daring to talk about it,” he said. “If you’re on the receiving end of a racist diatribe, and then you pretend that it doesn’t exist, that does not help people learn from it.”

Baker added that he hopes his post will prompt people to take action against racism.

“Racism doesn’t care whether or not you’re an actor on TV or if you won awards,” he said. “This is something that faces minorities on any job, not just because they’re in show business.”

Baker says he was motivated to pursue a show called “Uncle Stan,” centered on his character Stanley, after encountering numerous fans of “The Office” who all had the same question: What happened to Stanley after the sitcom’s series finale in 2013? As of Friday, Baker’s Kickstarter campaign has garnered over $345,000, surpassing its goal of $300,000.

More: The 10 best (and five worst) TV series finales of all time

Baker says the pilot picks up with Stanley’s nephew Lucky, a widower in Los Angeles, asking his uncle for help raising his two young children and managing a motorcycle and flower shop. Baker says his former “Office” cast members will be invited to participate.

“I kept getting asked the same questions over and over about the character of Stanley,” he said. ” ‘Well, what is he doing now? Does he still do crossword puzzles? He went to Florida and retired and was supposedly doing woodwork. Is he still doing that? What is his journey?’ According to the audience, they didn’t feel that his journey was over yet, so we’re gonna see where that takes us.”

‘The Office’ is leaving Netflix in 2021, heading to NBC streaming service

The show’s description on Kickstarter says Stanley will clash with other big personalities working at Lucky’s shop and that Stanley will have a “lady friend” with whom he is soon-to-be engaged.

Now that Baker and his collaborator Sardar Khan have met their fundraising goals, the next step, Baker says, is to meet with their writers and casting director to discuss plans for moving forward with a quality pilot. Though “Uncle Stan” is not yet attached to a network, Baker hopes that soon will change.

“(The fans) want to see what happened next, and with any luck, we will give them the ‘What happens next?’ scenario,” says Baker.

Sat Aug 15 , 2020
Who has the hardest job in the UFC? You could argue that there are just shy of 600 correct answers to that question, with the name of any fighter who steps foot in the Octagon a valid response. Jon Anik, Megan Olivi and Brendan Fitzgerald wouldn’t dare to dispute that […] 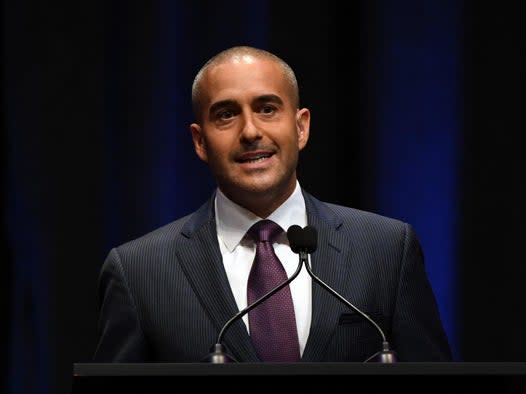