Jar Jar Binks, right, a character in the Star Wars franchise, is part of a long tradition of racial stereotypes when it comes to extraterrestrials, the study said – AFP Artificial intelligence risks creating a “racially homogenous” workforce, Cambridge University researchers have warned. Cultural depictions of artificial intelligence as white […]

Cultural depictions of artificial intelligence as white need to be challenged as they erase people of colour and result in machines with bias baked into their algorithms, the scientists claim.

According to the researchers from Cambridge’s Leverhulme Centre for the Future of Intelligence, like other science fiction tropes, artificial intelligence has always reflected racial thinking in society.

In the study published in the Philosophy and Technology journal, they argue there is a long tradition of racial stereotypes when it comes to extraterrestrials – from the “orientalised” alien of Ming the Merciless to the Caribbean caricature of Jar Jar Binks.

However, artificial intelligence is portrayed as white because, unlike species from other planets, it has attributes used to “justify colonialism and segregation” in the past, the researchers suggest.

Dr Kanta Dihal, who leads the centre’s decolonising artificial intelligence initiative, said: “Given that society has, for centuries, promoted the association of intelligence with white Europeans, it is to be expected that when this culture is asked to imagine an intelligent machine, it imagines a white machine. People trust AI to make decisions. Cultural depictions foster the idea that AI is less fallible than humans.

“In cases where these systems are racialised as white, that could have dangerous consequences for humans that are not.”

The experts looked at recent research from a range of fields, including human-computer interaction and critical race theory, to demonstrate that machines can be racialised, and that this perpetuates “real world” racial biases.

This includes work on how robots are seen to have distinct racial identities, with black robots receiving more online abuse, and a study showing people feel closer to virtual agents when they perceive shared racial identity. Dr Dihal said: “One of the most common interactions with AI technology is through virtual assistants in devices such as smartphones, which talk in standard white middle-class English.

“Ideas of adding black dialects have been dismissed as too controversial or outside the target market.

“The perceived whiteness of AI will make it more difficult for people of colour to advance in the field. If the developer demographic does not diversify, AI stands to exacerbate racial inequality.”

The researchers conducted their own investigation into search engines and found that all non-abstract results for artificial intelligence had either Caucasian features or were the colour white.

A co-author of the paper, Dr Stephen Cave, executive director of the centre, said: “Stock imagery for AI distils the visualisations of intelligent machines in Western popular culture as it has developed over decades.

“From Terminator to Blade Runner, Metropolis to Ex Machina, all are played by white actors, or are visibly white onscreen.

“Androids of metal or plastic are given white features, such as in I, Robot. Even disembodied AI – from HAL-9000 to Samantha in Her – have white voices. Only very recently have a few TV shows, such as Westworld, used AI characters with a mix of skin tones.”

Thu Aug 6 , 2020
Consumer Reports has no financial relationship with advertisers on this site. Samsung unveiled two new Galaxy Note20 smartphones on Wednesday that the company promises will deliver bigger, brighter screens, a speedier processor, and faster autofocus from the camera. The tech giant also announced an updated version of the dual-screen Galaxy […] 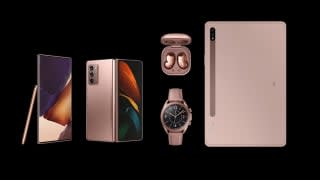