(Bloomberg) — In a bid to salvage a deal for the U.S. operations of TikTok, Microsoft Corp. Chief Executive Officer Satya Nadella spoke with President Donald Trump by phone about how to secure the administration’s blessing to buy the wildly popular, but besieged, music video app. Microsoft in a blog […]

(Bloomberg) — In a bid to salvage a deal for the U.S. operations of TikTok, Microsoft Corp. Chief Executive Officer Satya Nadella spoke with President Donald Trump by phone about how to secure the administration’s blessing to buy the wildly popular, but besieged, music video app.

Microsoft in a blog post Sunday confirmed talks to buy TikTok’s operations in the U.S., as well as in Canada, Australia and New Zealand, and said it’s aiming to complete the deal no later than Sept. 15.

The software giant’s public statement follows closed-door discussions with TikTok and Trump, who floated plans for an outright ban of the app on national security grounds and publicly lambasted the idea of a deal late Friday night. The companies now have 45 days to hash out a plan acceptable to all parties, a deadline insisted on by the White House, according to people familiar with the matter. The two companies have not yet worked out key details for a deal, including price, according to people familiar with the matter.

TikTok had become a flash point among rising U.S.-China tensions in recent months as U.S. politicians raised concerns that parent company Bytedance Ltd. could be compelled to hand over American users’ data to Beijing or use the app to influence the 165 million Americans, and more than 2 billion users globally, who have downloaded it. The app also drew ire from the U.S. president after anti-Trump activists used the platform to disrupt campaign activities.

In its blog post, Microsoft pledged to add more security, privacy and digital safety protections to the TikTok app and ensure that all private data of Americans be transferred back to the U.S. and deleted from servers outside the country. The company also said it may invite other American investors to take minority stakes in the company.

“Microsoft fully appreciates the importance of addressing the President’s concerns,” the company said. “It is committed to acquiring TikTok subject to a complete security review and providing proper economic benefits to the United States, including the United States Treasury.”

If a deal goes through, it would mark a dramatic intervention by the U.S. government in private enterprise and alter the global technology landscape. It would hand Microsoft a prominent role in consumer social media and online advertising — and threaten to end an era of globalization in the tech industry.

Microsoft’s statement didn’t explicitly say whether Trump would approve an agreement and forgo a TikTok ban, though Microsoft said it has been in discussions with Trump and would likely make such a public pronouncement only if it thought that would be forthcoming.

A TikTok spokeswoman declined to comment, while the White House didn’t immediately respond to a request for comment. Bytedance is committed to becoming a global company and strictly abides by local laws, the TikTok owner said in an online statement Sunday.

The blog post from Microsoft came after a weekend of tense negotiations that lasted late into the night among Microsoft, TikTok and the White House, as well as a string of appearances on Sunday morning cable shows by U.S. politicians trying to sway the President’s decision.

Factions within the administration and Congress have split into two camps: Those that want to keep the wildly popular music video app in operation by delivering it into the arms of an American company, and those that want to ban the app altogether in the U.S. because of TikTok’s Chinese roots. The latter would send a message to China that the U.S. too can also block internet companies from operating on its shores like China does with Facebook, Twitter and Google.

TikTok was launched in the U.S. more than two years ago, following Bytedance’s 2017 purchase of lip-synching app Musical.ly, which it folded into TikTok. The app became a social-media hit in the U.S — the first Chinese platform to make such inroads.

As TikTok surged to popularity, officials began calling for a national security investigation into the app. In November 2019, The Committee on Foreign Investment in the United States, or CFIUS, which investigates overseas acquisitions of U.S. businesses, opened a review of the Musical.ly purchase.

TikTok has repeatedly rejected accusations that it feeds user data to China or is beholden to Beijing, even though ByteDance is based there. It spent months trying to distance itself from its Chinese roots. It hired its first American CEO in June, former Walt Disney executive Kevin Mayer, as well as dozens of D.C. lobbyists. It announced plans for a new global headquarters outside of China and said it was considering other organizational changes to satisfy U.S. authorities.

After the coronavirus pandemic strained relations between the U.S. and China further, the anti-TikTok rhetoric grew louder. In June, Secretary of State Mike Pompeo and Trump both floated a possible ban of the app, suggesting there could be real action behind the China hawks’ words.

In response, ByteDance’s venture investors, including Sequoia Capital, urged company founder and Chief Executive Officer Zhang Yiming to head off any U.S. government action by selling a majority stake in TikTok to them, people familiar with the matter told Bloomberg News in July. At first, Zhang was reticent to give up control, but Bytedance feared an outright ban in the U.S. and the loss of a multi-billion business, according to people familiar with the deliberations. India instituted a ban on TikTok, which quickly devastated its business there.

Zhang relented and got on board with selling a majority stake to U.S. investors, but it turned out that arrangement wasn’t sufficient. Administration officials didn’t want to leave the company’s Chinese founder with even a minority stake or for ByteDance’s long-time venture capital allies to have a majority stake in the company, these people said.

At that point, ByteDance was facing increasingly dire threats in the U.S. Proposals by the company intended to assuage U.S. regulators concerns about TikTok had fallen short and the company was running out of time and options, one of the people said.

Over the weekend, Sec. Pompeo said the Trump administration will announce measures shortly against “a broad array” of Chinese-owned software deemed to pose national-security risks, suggesting the actions may go beyond the one Chinese app. In a late Friday night missive, Trump told reporters: “As far as TikTok is concerned, we’re banning them from the United States.”

TikTok has hired almost 1,000 people in the U.S. this year and will be employing another 10,000 into “great paying jobs” in the U.S., a company spokeswoman said in a statement. The business’s $1 billion creator fund also supports people in the country who are building livelihoods from the platform, she added.

“TikTok U.S. user data is stored in the U.S., with strict controls on employee access,” she said. “TikTok’s biggest investors come from the U.S. We are committed to protecting our users’ privacy and safety.”

The purchase of TikTok’s operations in the U.S. and the three other countries, should it be concluded, would represent a huge coup for Microsoft. The world’s largest software company would gain a social-media app that has won over young people with a steady diet of dance videos, lip-syncing clips and viral memes. The company has dabbled in the lucrative sector, but hasn’t developed a popular service of its own. Microsoft acquired LinkedIn, a job-hunting and corporate networking company, for $26.2 billion in 2016.

A deal would vault Microsoft into the social media and advertising markets dominated by Facebook Inc. and Google. Microsoft once paid $6.3 billion for Internet ad company aQuantive, the largest deal ever for the company at the time. The effort failed and the company ended up writing down almost the whole value of the deal and then selling its remaining display ad business to AOL in 2015.

Microsoft has a search ad business but it declined 18% last quarter. With no consumer social media app, Xbox and Minecraft are pretty much its sole attention-getter among younger users. TikTok would help bolster that business, though it would also push Microsoft to confront controversial areas it has mostly avoided, such as censorship and disinformation.

Buying TikTok would give Microsoft “a crown jewel” in consumer social media at a time when Facebook and Google are under massive regulatory scrutiny over antitrust concerns, said Wedbush analyst Daniel Ives in a research note.

Microsoft, which briefly employed Zhang, is an American company but it’s also deeply embedded in China. Bing and Linkedin, which both censor content in China, remain the only major search engine and social networking platform allowed to operate in China by U.S. companies.

Microsoft and TikTok now have 45 days to hash out a price, terms, how Microsoft would pay for the unit, or how any technology-sharing or transfer of assets of the video-sharing app would work. Deal negotiations may be complicated on one side by ByteDance investors eager for a big payout for the popular app, and on the other by Microsoft viewing itself as a white knight rescuing a troubled business. The Trump administration could also throw a wrench into the process at any point.

An outpouring of support for TikTok and anger against President Trump spread across the Internet in recent days as users displayed outrage with a potential U.S. ban on what’s become one of the most popular media companies in America. Videos with the hashtag #ban had more than 620 million views by Sunday night on TikTok.

“This is what Trump gets for planning to ban Tiktok,” wrote one user on TikTok named @rainbownursesarah, flashing to a video of a sparsely-packed stadium at a Tulsa, Oklahoma Trump campaign rally that TikTok users sought to disrupt in June.

Free speech advocates also piled on against the idea of banning any kind of Internet service, regardless of its owner.

“Banning an app that millions of Americans use to communicate with each other is a danger to free expression,” said Jennifer Granick, surveillance and cybersecurity counsel at the American Civil Liberties Union. “Shutting one platform down, even if it were legally possible to do so, harms freedom of speech online and does nothing to resolve the broader problem of unjustified government surveillance.”

(Updates with details on Trump inolvement from fourth paragraph.)

Mon Aug 3 , 2020
. (Photo: Illustration: Rebecca Zisser/HuffPost; Photos: Snapchat) An attention-grabbing Snapchat ad features a cartoon version of President Donald Trump dancing through fireworks and a cascade of dollar bills to the tune of “Hail to the Chief.” Bold text against a flashing red, white and blue background promises a “FREE Trump 2020 Bundle” of […] 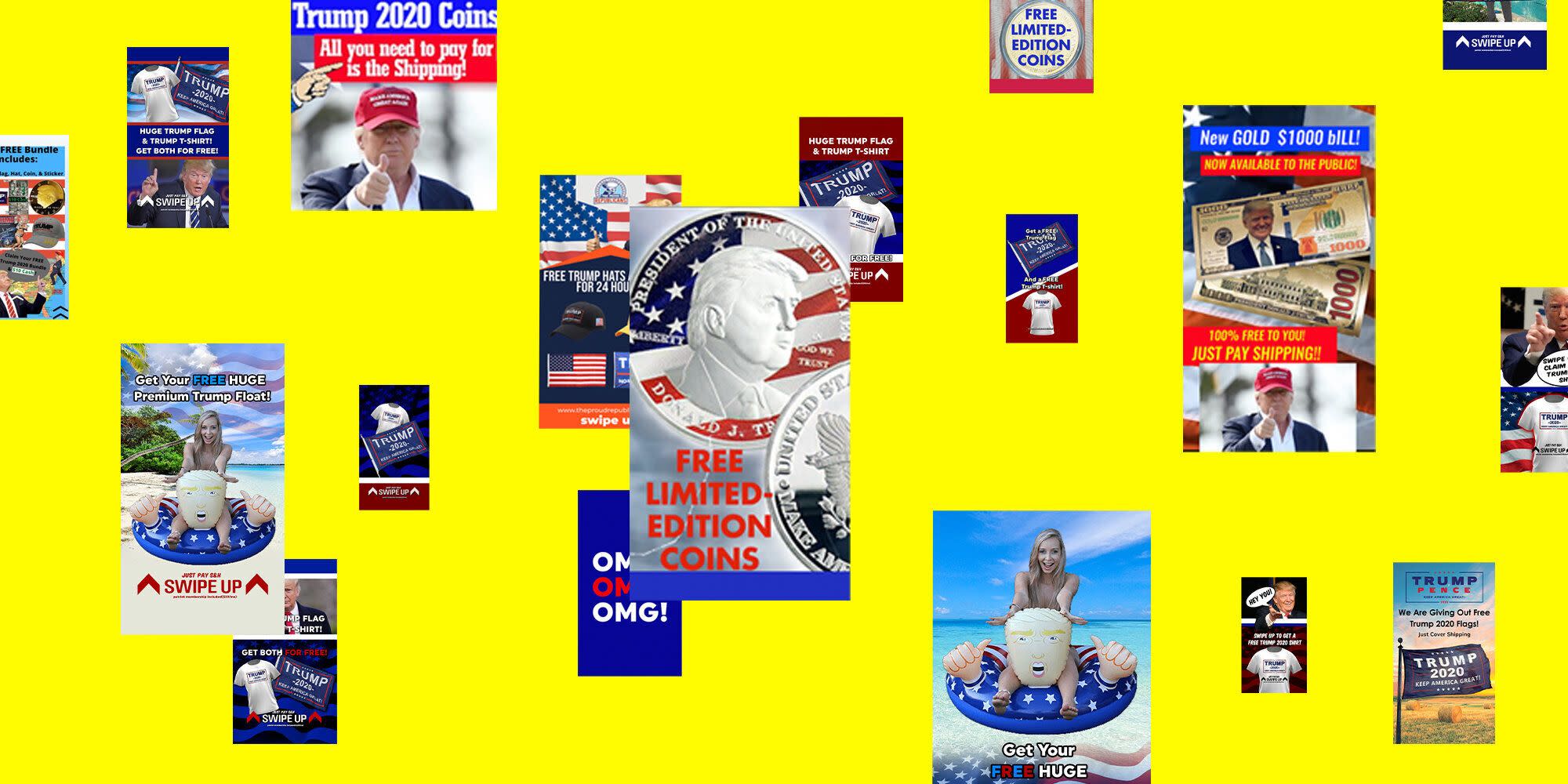