LONDON—In a few weeks or months, Judge Vanessa Baraitser will rule on whether Julian Assange can be taken to the United States to face a string of serious espionage charges, so it’s probably a good idea for him to stay in her good graces. But on Tuesday, the second day […]

LONDON—In a few weeks or months, Judge Vanessa Baraitser will rule on whether Julian Assange can be taken to the United States to face a string of serious espionage charges, so it’s probably a good idea for him to stay in her good graces.

But on Tuesday, the second day of the WikiLeaks founder’s extradition hearing in London, which was delayed for months by the coronavirus pandemic, Baraitser delivered a forceful warning to Assange that he will be removed from court for good if he can’t keep his thoughts to himself while witnesses are delivering their evidence.

Assange reportedly shouted out “nonsense” during the hearing when the lawyer representing the U.S. told a witness that the WikiLeaks founder was facing extradition not for handling leaked documents but for releasing the names and endangering U.S. informants.

Clearly displeased by his outburst, Baraitser told Assange, who was in the dock, that he must not speak out even when he inevitably disagrees with the position of the prosecution team.

“If you interrupt proceedings and disrupt a witness who is properly giving their evidence, it is open to me to continue without you in your absence,” Baraitser told Assange. “This is obviously not something I wish to do. I am, therefore, giving you a clear warning.”

The judge added, “I understand you’ll hear things you disagree with… and you’d like to contradict and speak about these things yourself, but this is not your opportunity to do so.”

The warning came after the founder of the legal charity Reprieve, Clive Stafford-Smith, told the court that “grave violations of law,” including the use of U.S. drones for targeted strikes in Pakistan as well as alleged U.S. war crimes in Afghanistan and at Guantanamo Bay, had been exposed in the documents published by WikiLeaks.

James Lewis QC, who is representing the U.S. authorities, hit back that the case was not about the usefulness of the documents and that the U.S. charges revolve around the publication of the names of informants in Iraq and Afghanistan that had put their lives in danger. It was Lewis’ rebuttal that provoked Assange’s outburst.

It was just the second day of a four-week hearing at the Old Bailey, where the WikiLeaks founder is fighting extradition to the U.S. to face an 18-count indictment on espionage charges. Assange embarrassed the U.S. government a decade ago by publishing thousands upon thousands of confidential American documents.

However, Assange’s supporters see him as a journalist and a champion of free speech—an argument which has been adopted by his lawyers in the early days of the hearing.

The U.S. charges against Assange carry a maximum sentence of 175 years in prison.

Sat Sep 12 , 2020
A  tax subsidy for automation would overturn an assumption made by economists since at least the 1930s. The assumption is that technology, in order to displace human labor, must perform a workplace task more efficiently than a human. If tax policy penalizes the employment of human labor relative to the deployment […] 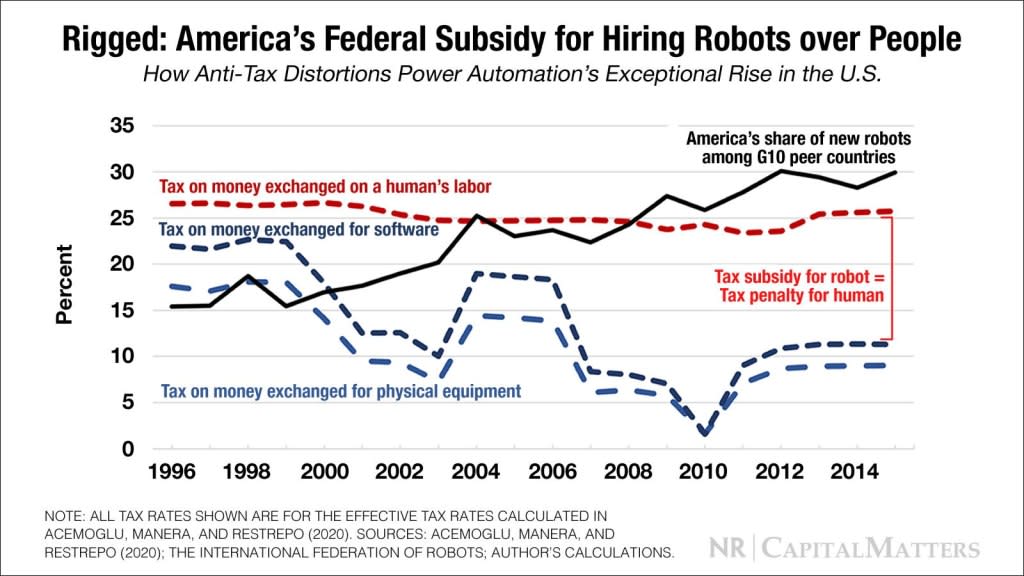