A few weeks after the new coronavirus arrived on U.S. shores, Dr. Arturo Casadevall hatched a plan to beat back the outbreak with a medical advance so powerful it had earned a Nobel Prize.

That’s when Dr. Emil Adolf von Behring was honored for pioneering the use of so-called convalescent serum as a treatment for diphtheria. In 1892, the Prussian bacteriologist infected horses with the pathogen that causes the deadly disease. If the beasts recovered, Von Behring harvested their blood, removed its red blood cells and clotting proteins, and introduced the resulting antibody-rich fluid into the bloodstreams of human diphtheria patients.

Until a diphtheria vaccine came into broad use in the 1930s, Von Behring’s daring experiments saved countless lives. At the end of the 19th century, diphtheria, known as “the strangling angel,” was the 10th most common cause of death in the United States, and a pitiless killer of children.

Convalescent serum would go on to become a mainstay of treatment for measles, mumps, tetanus, smallpox and polio before the “era of vaccine” began in the late 1940s.

“It’s a beautiful history,” Casadevall, a microbiologist and physician at Johns Hopkins University, said with wistful ardor. “It was the birth of immunology.”

Amid a pandemic response that promises marvels of genetic engineering, vaccines developed at “warp speed” and artificial intelligence at the bedside, it takes courage for a scientist to dust off a remedy from the history books and propose it as modern medicine.

The yellowish elixir now drawn from the blood of recovered COVID-19 patients is plasma, which retains some clotting factors. It has been tried against the Ebola virus and novel strains of influenza, only to be shelved when vaccines became available.

Reviving the 19th century invention to fight a 21st century pandemic is no job for the faint of heart. It will generate neither profits nor scientific glory. Yet to navigate a gauntlet of clinical trials and logistical challenges, it does require a mighty intellect, a heap of energy, the ability to muster an army of skilled recruits and a knack for fundraising.

And so, nearly every night for five months, Casadevall and two longtime colleagues — Dr. Michael Joyner of the Mayo Clinic and Dr. Liise-anne Pirofski of Albert Einstein College of Medicine — have met online to plot the potential comeback of convalescent plasma. They hope it can become both a treatment for COVID-19 and a way to protect people at high risk of coronavirus infection from becoming ill.

All in their 60s and well into accomplished careers at leading medical institutions, this trio might have spent the pandemic engaged in quieter pursuits. Instead, the three are putting immune system proteins from recovered patients through modern scientific trials, hoping to buy time for other medical advances to come along.

They’ve created the National COVID-19 Convalescent Plasma Project, a consortium of 260 doctors and scientists from 57 institutions around the country. Members of their coalition have launched more than 50 laboratory studies and clinical trials, and as of Thursday, 79,059 patients had been treated under the project’s experimental “compassionate use” program. Preliminary findings are expected soon.

Their passion has them living on “COVID time,” practicing science at all hours of the night and day as kids and spouses hover near their makeshift home offices. The pace of research has been compressed beyond recognition.

Joyner, who handles the project’s day-to-day management, wakes at 4 a.m. and works for 16 hours, crushing sets of 50 push-ups between meetings and falling asleep at his desk. Casadevall and Pirofski oversee trials, recruit scientific talent and build support for the national effort.

If their work demonstrates even a modest benefit, convalescent plasma could help get children back to school safely and allow more of the economy to reopen. Successful results could also hasten vaccine development by making it possible to infect testers deliberately, which would speed up the evaluation process.

The initiative has reached well beyond the premier academic medical centers where most clinical trials are run. Dozens of doctors and patients in small and mid-sized community hospitals have had a chance to join in.

Dr. Shmuel Shoham, a participant from Johns Hopkins who normally treats transplant and cancer patients with compromised immunity, put it this way: “We’re crowdsourcing a cure.”

By mid-February, the novel coronavirus had ravaged Wuhan, China, and spread to Egypt, Iran, South Korea and most of Europe. Instances of community spread were being reported in the United States, prompting Casadevall to assess his profession’s readiness to treat the respiratory plague.

It was bleak. But by harnessing the power of convalescent plasma, he thought, it might be less so.

He made his case in a Wall Street Journal essay that recounted the story of Dr. J. Roswell Gallagher, who headed off a measles outbreak in 1934 by giving people shots of plasma from recovered patients. The approach was worth another shot, he argued.

Pirofski too read the piece. “It was a lightbulb moment” for the medical establishment, she said. She reached out to Casadevall, and the two of them drafted an article to convince fellow doctors that convalescent plasma was worth a try. It was published March 13 in the Journal of Clinical Investigation.

Joyner, too, came across the Wall Street Journal essay and was galvanized by the idea’s simplicity. Also a reader of medical history, he burrowed into articles about the use of convalescent plasma during the 1918 flu pandemic, where it appears to have reduced patients’ risk of dying by 25% to 50%. “This could work!” he told himself.

The next day, he called Casadevall and offered his services.

The three make a powerful, if improbable, team.

Casadevall is a courtly, Cuban-born physician, a pioneer in the study of disease-causing fungi, and a passionate student of history.

Pirofski is a Californian who came late to science and medicine from the humanities. As an intern with Casadevall during the height of the AIDS crisis, she honed both a doctor’s compassion and a reputation as a fiercely intelligent immunologist.

Joyner is an anesthesiologist, a sports nut and a leading authority on athletic performance. On a 1-to-10 scale of extroversion, he gleefully volunteers he’d score a 15.

By the first week of March, the three of them were recruiting collaborators idled by the pandemic’s stay-at-home orders, urging them to pitch in where they could.

There was so much to learn about the mysterious new coronavirus: Which antibodies mattered most, and could existing tests detect them? Did all infected patients develop the kinds of antibodies that conferred immunity? How long might such immunity last?

Other issues would demand the instincts of doctors on the front lines. What dose of convalescent plasma would have the best shot at helping, and how should it be administered? What risks would a transfusion present? Which patients are likely to benefit most, and what outcomes would you measure?

Testing an experimental therapy would require scientists with statistical chops and a robust system for data collection. They’d need people with logistics skills to launch blood drives in the middle of a pandemic and to distribute plasma, which has a three-day shelf life, from where it’s collected to where it’s most needed.

Meanwhile, someone would need to navigate the federal government’s regulatory machinery — a task that calls for hustle, contacts and an accountant’s zeal for bureaucratic detail and budgeting.

A few hurdles would be particularly challenging. Antibody tests would have to be cheap, accurate and easy to field. The nation’s blood banks and collection agencies would have to be brought on board. If the therapy were shown to help, a small supply chain would have to get very big — in a hurry.

Doctors from a range of specialties signed on, as did biostatisticians, public health researchers, microbiologists, blood bankers and information technology specialists.

“They’ve been so collaborative,” Pirofski said. “There’s none of that selfishness in science, where there’s a race to be first.”

With big profits at stake, pharmaceutical giants routinely muster the resources to get such complex initiatives over the finish line. But convalescent plasma promises no exclusive marketing rights, no intellectual property and no big payday.

In the first two months of the initiative, two crucial ingredients were in short supply. The first was plasma itself. Patients in early hot spots were just emerging from their ordeals, and few knew their blood could be of any value to others.

That began to change when collaborators from the New York Blood Center approached the hard-hit Orthodox Jewish community in the area. Survivors responded by rolling up their sleeves. It was the start of a grass-roots recruitment effort.

Beyond that, the lifeblood of modern medical research — federal funding — was nowhere in sight. Officials were encouraging in phone calls and online meetings, Joyner said, “but nobody brought their checkbook.”

Volunteers across a range of skills had worked gratis for more than a month — an unheard-of situation. Still, Joyner and the others knew that without federal funding, they’d hit a wall when it came time to carry out clinical trials.

By early April, the initiative had managed to secure around $5 million in seed funding, including $3 million from Bloomberg Philanthropies and $1 million from the state of Maryland. Then, in early May, the federal tap began to flow. The Biomedical Advanced Research and Development Authority, known as BARDA, in the Department of Health and Human Services committed as much as $50 million to testing convalescent plasma — a sum larger than many drugmakers and vaccine designers have won.

‘This is helping people’

So far, the herculean effort appears to be yielding signs of promise. Data from about 5,000 patients with severe cases of COVID-19 suggest the treatment is safe. Findings from an uncompleted trial in China suggest that the critically ill elderly and patients of all ages with moderate illness might benefit the most from the treatment.

A “study of studies” posted online Friday by the project’s leaders offers a tantalizing, if preliminary, hint of the lives that could be saved by convalescent plasma. Led by Joyner, the team aggregated the findings of the China trial and 10 other studies that documented convalescent plasma’s use in a total of 525 hospitalized COVID-19 patients. Patients who got the experimental treatment were 57% less likely to die of COVID-19 than were comparably ill patients who did not, the researchers concluded.

Findings expected to be released in the coming weeks will begin to show whether that promise is borne out in American patients hospitalized for COVID-19, Joyner said. By summer’s end, team members will be analyzing the therapy’s effects on patients who have not needed hospitalization and those who’ve been exposed but show no signs of illness.

“All the indicators are that this is helping people,” Casadevall told his troops in a weekly phone call July 24. If that is borne out, “we can probably save a lot of lives in the summer and fall” before vaccines or better treatments emerge, he said.

It’s certainly possible that convalescent plasma could fall short. It could be overtaken by more effective medicines, or by a vaccine. Some fluke of the coronavirus, or twist in the pandemic, could make it impractical as treatment or prevention.

Casadevall, Joyner and Pirofski are prepared to accept those outcomes.

No matter what, he and his army will have taught young doctors how research used to be done when resources were more scarce. Scientists will gain insights into the body’s response to coronavirus infection and see what progress can be made when they pull together in a national crisis.

“This is not going to get anyone a ticket to Stockholm” for another Nobel Prize, Joyner said. But near the end of a long career, “I’ve been very happy to step into the breach.”

Tesla has a huge lead over other automakers. See how the electric-car company's brand became so mighty.

Sat Aug 1 , 2020
Tesla CEO Elon Musk has built Tesla into one the most powerful brands in the world. Jae C. Hong/Associated Press In the car business, it’s often said that brands are grand, but products pay the bills. In other words, you can capture or retain customers with what your company stands […] 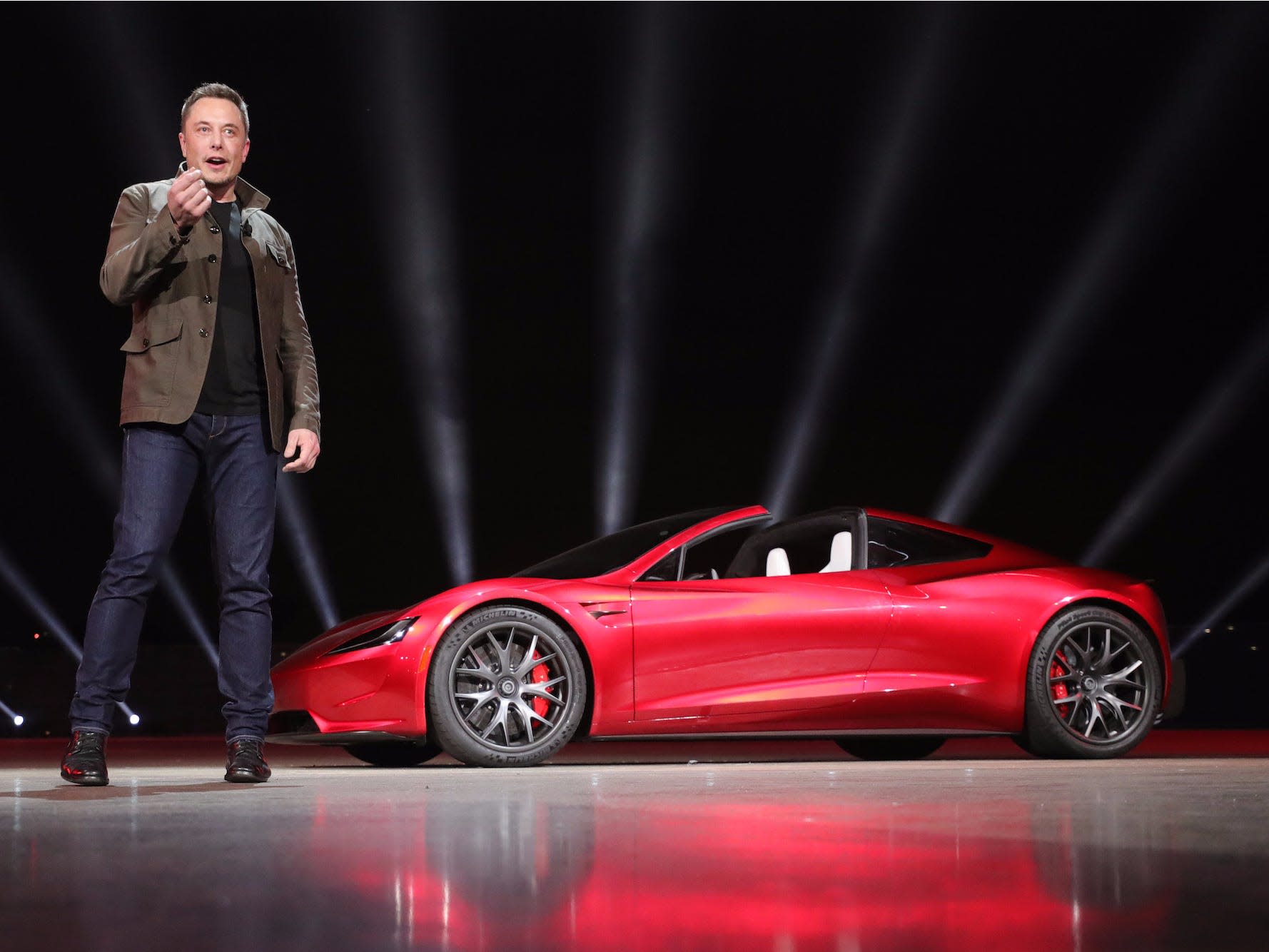