An attention-grabbing Snapchat ad features a cartoon version of President Donald Trump dancing through fireworks and a cascade of dollar bills to the tune of “Hail to the Chief.” Bold text against a flashing red, white and blue background promises a “FREE Trump 2020 Bundle” of MAGA-themed merchandise and even $10 in hard cash — all for a fee of just 69 cents to cover shipping.

The offer is targeted to male youths who live in red states, watch political news and enjoy online shopping, according to Snapchat data. It could be hard to resist for many of the app’s overwhelmingly young users.

“Please support President Trump & Traditional American values by claiming Your FREE Trump 2020 Bundle before this weeks [sic] 33,500 units are gone,” says the text on the ad’s landing page. A checkout button is labeled, “YES, I SUPPORT OUR PRESIDENT.”

Buried in fine print at the bottom of the page, which displays a large countdown clock, is a disclaimer that says the “free” bundle is actually a “welcoming gift for joining the Trump4President2020 Club.” Members are automatically billed $142 every month, with no option for a refund.

As the race for the White House rages on, Trump4President2020 and an array of other little-known advertisers are carefully targeting Snapchat users as young as 15 with a barrage of pro-Trump ads based on their age, gender, location, presumed interests, online activity and even their affinity for Fox News. The ads mimic Trump’s rhetoric and offer users “free” swag — flags, T-shirts, hats, custom coins, novelty bills, pool floats — often as tokens of gratitude for their “patriotism.”

In reality, Snapchat is letting scammers zero in and prey on some of its youngest users by exploiting their naivety and ardor for the president.

The widespread grift highlights the platform’s struggle to weed out predatory advertisers, as well as the potential perils of so-called dark ads, which feature customized messages that are targeted to specific, siloed audiences and avoid public scrutiny.

In the case of the Trump ads, poorly-vetted Snapchat advertisers — sometimes masquerading as Trump’s official campaign — are quietly peppering teens and young adults with bait-and-switch schemes.

Snapchat serves as a megaphone for paying advertisers, helping their messages reach any number of its hundreds of millions of global users. The messages include easily identifiable scams that could financially devastate credulous teens, despite the app’s policy of prohibiting ads that are “false or misleading, including deceptive claims, offers, functionality or business practices.”

Snapchat has raked in close to half a million dollars in a matter of months from an operation that was seemingly built to con young Trump supporters en masse, called Albbiom Marketing LLC. The firm, which has virtually no web presence, has spent more than $407,000 on at least 156 misleading Snapchat ads promoting “free” Trump gear this year alone. Its ads have been viewed in excess of 435 million times, indicating that individual Snapchatters have seen them repeatedly. Each leads to a page that, as with the Trump4President2020’s website, features a countdown clock, a checkout button labeled, “Make America Great Again!” and small, inconspicuous text stating that in addition to shipping fees, the “free” deal comes with a “USA Patriot Nation Club” membership costing up to $49.97 monthly.

The Proud Republicans, another Snapchat advertiser hawking Trump merch, takes a different approach. Targeting users aged 18 and up, it promotes “free” hats and flags — but there’s no hidden or costly membership. Instead, it charges exorbitant shipping fees for the products, which simply never arrive, according to a deluge of online complaints.

In response to emailed questions about its business practices, The Proud Republicans offered to help HuffPost locate its order information. (HuffPost did not place an order with the company.)

FreeTrumpBills and GoTrump 2020, separate Snapchat advertisers respectively pushing “free” novelty $1,000 dollar bills and collector coins, display on their websites identical reviews that appear to be from the exact same people, despite selling different products and purporting to be two distinct companies. A message sent to the email address listed on FreeTrumpBills’ website did not go through; GoTrump 2020 did not respond to a request for comment.

The landing pages for two separate Snapchat advertisers targeting Fox News watchers who are 15 and older with ads for “free” Trump items are now defunct. But one, belonging to Trump Merch Store — which ran an ad that was viewed more than 40,000 times featuring Trump’s official campaign logo — still triggers a pop-up message warning that the website may be trying “to steal your personal or financial information.”

Those two advertisers could not be reached for comment, nor could Trump4President2020, which on its website lists its contact information only as “__________.” (Good luck to anyone who may be trying to cancel the $142-per-month memberships they unwittingly signed up for.)

Snap, which owns Snapchat, told HuffPost that the Trump4President2020 ad starring a cartoon Trump was approved in error and removed within two days — but not until it had been viewed thousands of times. The company also said that political ads and corresponding landing pages go through human review and are subject to quality checks to proactively ensure compliance with its community guidelines and advertising policies.

But the scores of deceptive political ads from Albbiom Marketing LLC — which said in an email that it is “a very customer-focused company” and does “not receive many complaints” — were revoked only after HuffPost brought them to Snap’s attention.

A Powerful Way To Find People

Like other ad-hosting social media giants, Snapchat grants its clients access to its powerful ad-targeting technology, allowing them to use a wide range of criteria to customize their desired audiences and advertise to them in isolation. This practice is widely known as microtargeting.

Snap says it does not offer microtargeting services and that its ad-targeting parameters are not as granular as those of Facebook and other platforms. But it does let advertisers specifically target or exclude Snapchatters based on their age, gender, education and income levels, electoral district, marital and parental status, proximity to a high school or college, occupation, homeownership status, geographic coordinates and interest in things such as social activism, drinking beer and memes, among other categories.

On its website, Snap also states that ad buyers can “tap into an expansive data marketplace to develop a segment for an individual campaign, objective, product or service” and reach “a highly targeted group of Snapchatters based on their past buying patterns or viewing behaviors.” This is microtargeting in a nutshell, regardless of the terminology Snap prefers, and it can help maximize spending efficiency: A gourmet cat-food retailer in Manhattan’s Upper East Side could narrow its ads’ reach to wealthy pet owners in that area, for example.

But the practice can also have more serious implications when deployed with malicious objectives, such as voter suppression or targeting young Snapchatters — at times specifically including those in Republican states and with conservative interests — with highly deceptive ads to try to cheat them out of their money.

Digital advertising watchdogs have long sounded the alarm about transparency when it comes to microtargeting because such ads only appear to specific audiences — largely shielding them from inspection by the greater public. Facebook employees raised similar concerns last year in an open letter to CEO Mark Zuckerberg, in which they called on him to restrict political advertisers’ microtargeting abilities. (He declined.)

Snapchat, a smaller yet still dominant ad platform, has flown under the radar in this regard. But scammers’ ability to leverage the app’s advertising powers in order to rip teens off demonstrates its own vulnerability to nefarious activity through ad-targeting — and that it could be used in a political context with worse ramifications. Political campaigns have already tapped into the app’s microtargeting powers to reach select voters, as the Financial Times reported.

In response to public pressure, Snapchat and other advertising platforms have started cataloging their political ads in public databases. It’s a major stride that makes reporting such as this possible, although the sheer volume of content can still make it nearly impossible to catch every abusive microtargeted ad. Finding the ones in this article — which are categorized as political likely because of their advocacy for Trump — entailed mining through a spreadsheet with thousands of entries and limited search options. Unlike the equivalent ad archives from Google and Facebook, the Snap political ads library contents are not easily browsable in a user-friendly online database; they must be downloaded as zip files and externally reviewed.

Other platforms are starting to shy away from political ads amid a growing public uproar over microtargeting and other issues. Google limited the ways that political ads can be targeted. Facebook lets users opt out of seeing political ads. TikTok and Twitter banned political ads outright. But Snapchat is doing the opposite. The company is aggressively pursuing political ads, its chief business officer, Jeremi Gorman, said during a quarterly earnings call last month.

“As it pertains to political ads, yes, it’s a segment that we are actively going after. We serve 90% of 13- to 24-year-olds in the U.S. and 75% of 13- to 34-year-olds in the U.S. So educating them, allowing them to learn more about the issues, any factual based manner is super critical,” Gorman said. “To ensure transparency, all political issue and advocacy ads are publicly available, along with relevant information on impression spends and paying entities in our Snap political and advocacy ad library,” he added.

But targeting youth with deceitful ads peddling “free” MAGA merch is hardly educational. And rolling out a public ads library as an answer to transparency concerns places the onus on third-party individuals such as reporters to hunt for problematic ads and bring them to light rather than enforcing stronger vetting policies to ensure bad actors aren’t given an advertising platform to begin with.

Until that changes, grifters will continue to plague the app unabated, and young people will (literally) pay the price.

Love HuffPost? Become a founding member of HuffPost Plus today.

How To Undermine Democracy Using This One Simple Trick

Facebook Is Making Millions Off A Nationwide Gun Permit Scam

This article originally appeared on HuffPost and has been updated.

Businesses pivot to meet the demand for COVID-19 disinfection

Mon Aug 3 , 2020
MILWAUKEE – As more people are allowed back into offices, restaurants and hotels under the City of Milwaukee’s re-opening plans, the need for disinfection is greater than ever. Pest 2 Rest Pest Control, a family-owned extermination company, is one of the many businesses that now specialize in COVID-19 disinfection. “There is […] 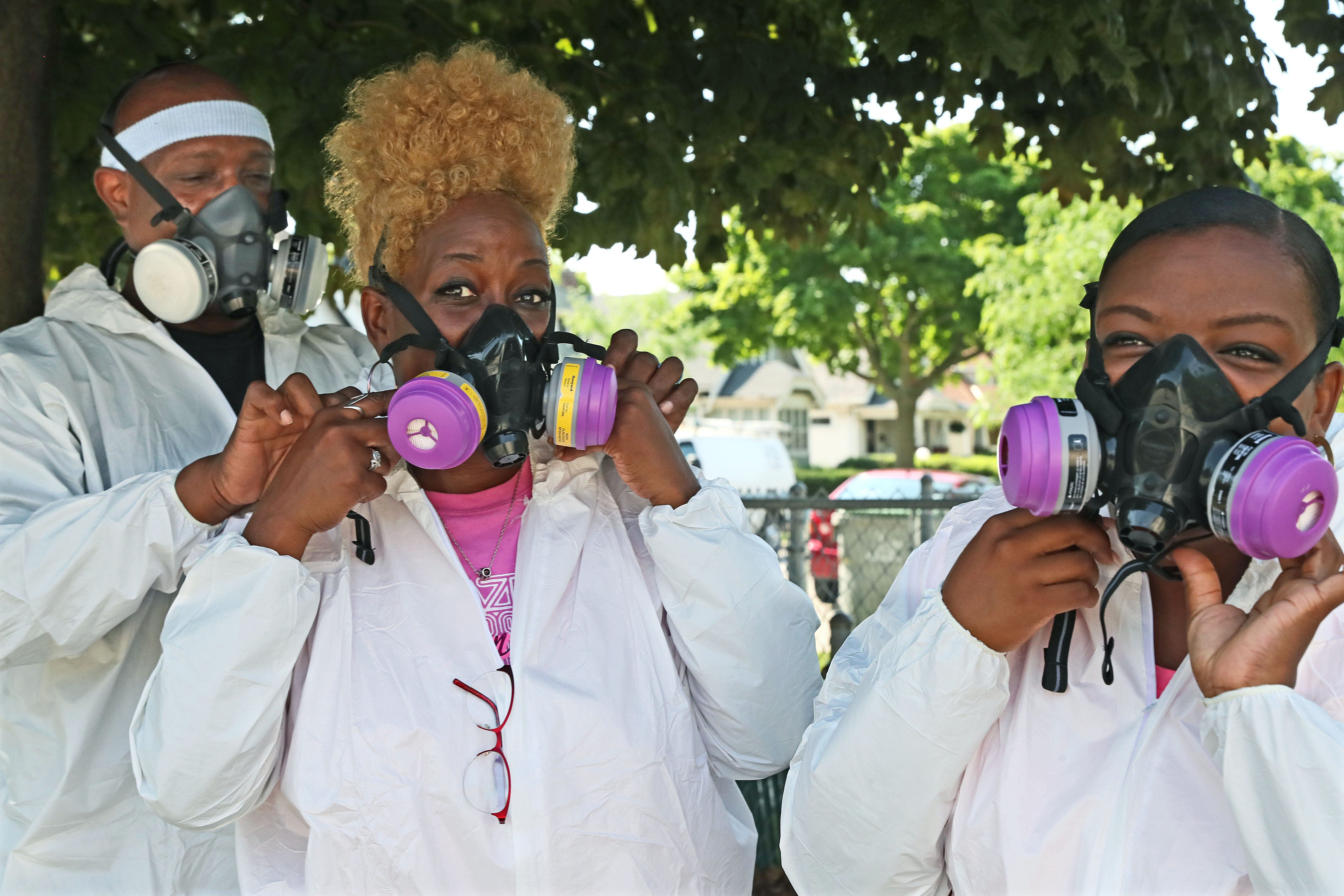