The CES show, the largest trade gathering in the United States and the premier annual meeting of the tech industry, will not be greeting the public in January, as planned, due to the coronavirus pandemic.  Instead, the organizers say they’re going all-digital, with several days of online entertainment planned for […]

The CES show, the largest trade gathering in the United States and the premier annual meeting of the tech industry, will not be greeting the public in January, as planned, due to the coronavirus pandemic.

Instead, the organizers say they’re going all-digital, with several days of online entertainment planned for Jan. 6-9, 2021.

Good luck with that.

As a longtime attendee, with more years of attendance than I care to admit, I think the odds of success here are very tough. Yes, we can devote three days of our lives to getting to Las Vegas and roaming the show floor. It’s a lot harder to do it in front of a computer for hours.

That said, can CES put on a great show that people would want to tune into?

Naturally, I have some ideas.

Let’s start with why we go to CES in the first place. To see the cool new products being introduced, to be wowed by them and to get a sense for where the industry is headed this year.

There’s also lots of talk. Many attend CES industry exec keynotes and panel discussions. But let’s face it: Many of the LinkedIn generation go to panels to network, hoping to meet up with top industry insiders in the room, and the keynotes are much of the same. A little education, but also schmoozing.

So if CES hopes to replicate the experience by offering more online webinars and panel discussions, I don’t see myself taking three days off from work to watch the online show.

But what about a really great, highly produced online presentation that truly showcased new products?

Now that would be must-see streaming.

As I said, I go to CES to see what’s new. What was so hard about CES was that as so many other conferences fell off by the wayside over the years (Comdex, MacWorld, etc.) CES became the one show that – love it or hate it – most everyone in tech attended.

And it became so big and bloated that with 175,000 people crowding the halls, just getting from point A to point B was a constant challenge. It had so many exhibitors that it was tough to see all the booths in one convention hall, let alone the satellite facilities that sprung up all over town.

And with so many people in Las Vegas, it could take upwards of an hour just to get a cab to visit one of the other facilities.

So I love the idea of ditching those logistics.

Put on an amazing show

Apple showed with its online presentation for the Worldwide Developers Conference in June that it could be done, and done really well. But that’s Apple, which does things its way. Those high-profile yearly product reveals are million-dollar TV shows meant to live on, for the online audience.

So take what Apple has done, and apply it to CES. Sounds cool, right?

But what happens if CES is calling the shots, and telling Samsung, LG, Sony, TCL and so many of the long-time exhibitors how it wants to present the showcase to viewers?

I can tell you from experience that the CES presentations from these companies generally last an hour at least, with a good 30 minutes devoted to self-congratulations and executive ego shining. A good CES producer will want to focus just on what’s new and let us really see the products. And to ditch the chatter.

Can CES convince the companies to do it right?

I could see a CES devote two to three hours daily to highly produced product demos, and perhaps an hour of industry chatter. I could imagine an hour show devoted to CES’s annual Innovation Awards, where the Consumer Technology Association selects winners in many categories that it deems worthy of showcasing.

But let’s not forget that most of what we see at CES is junk. It’s old products masquerading as new, or new things with no hope of ever getting actually released. In my years at CES, I’ve seen smart shoes, smart bras, smart shirts, smart everything. When’s the last time you wore your smart shirt?

But occasionally, something fun comes out of the startup room.

What does it do about all the tiny start-ups that come to Las Vegas every year, hoping Lady Luck will rub on them, that some buyer from Walmart, Target or somewhere else takes the time to stop, miraculously puts in a order and gets the product on the map? (This indeed happened for Ring, which brought its product to CES on a card table, found a buyer and later got bought by Amazon for $1 billion.)

OK, the startups get a show, too.

And this is where CES Digital could actually improve on being there in person. I can’t tell you how many times I’ve talked to an exhibitor about their product, and asked for a demo, only to have them tell me it was just a “prototype.”

Like the drone that you tossed in the air like a frisbee and it somehow started flying, without any controls. (It was never released.) Or last year’s flying car announcement from Hyundai.

OK, big mouths. You have an announcement and a breakthrough? Show me! Prove it. You have the video floor. I can’t wait to watch.

Now add in in a few keynotes, but only if they have big names (i.e., people we want to hear from), or dive into hot-button topics that make for riveting entertainment. You know, like “Should Big Tech Be Reigned In? Facebook faces off with government regulators.” Or, “Does TikTok deserve to be banned in the United States?” Stuff like that. Zoom sessions with a bite.

CES has its work cut out for it. Because there’s nothing like being there in person, asking questions, meeting people, seeing the products for yourself.

But, I’ll be the first one to tune in to a really incredible showcase of worthy new products and industry chatter. I have to. It’s my job.

But wouldn’t you, too?

Wed Jul 29 , 2020
WASHINGTON (AP) — The Latest on testimony before a congressional committee by the CEOs of Facebook, Apple, Amazon and Google (all times local): 5:20 p.m. U.S. lawmakers have repeatedly ripped the CEOs of Apple, Amazon, Google and Facebook while likening them to copycats, liars, bullies, drug dealers and traitors in […] 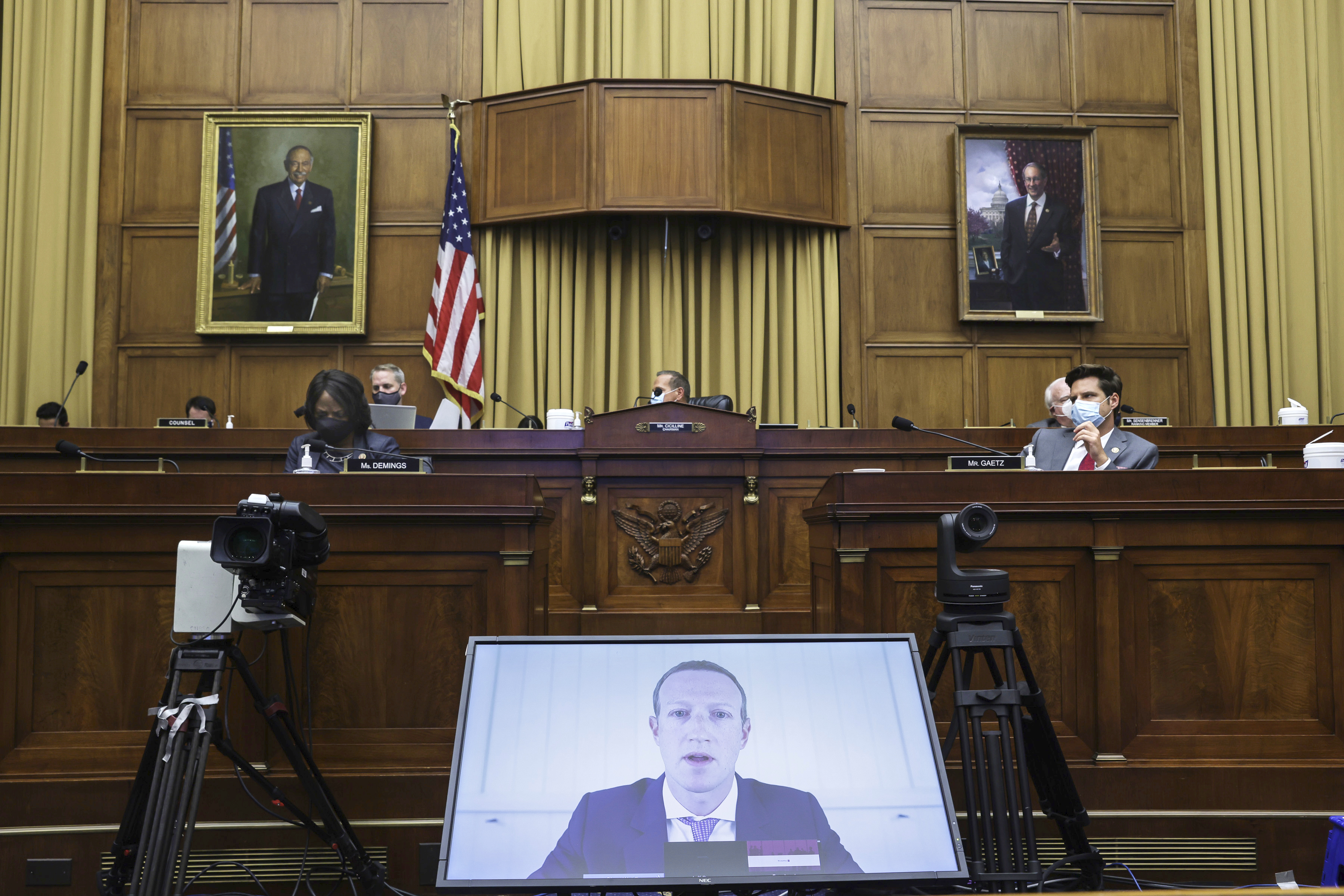