To use the words of prophet and frequent convention attendee Hunter S. Thompson, when the going gets weird, the weird turn pro. This year, the professional weirdness of Comic-Con has taken a twist, as the four-day event will take place exclusively online.

To their credit, organizers are trying to replicate the commercialized fan-friendly confines of the San Diego Convention Center as much as possible: there is the traditional souvenir book featuring a pretty sweet drawing of Ray Bradbury on a T. Rex on the cover that is available for free .pdf download (and featuring click-through advertisements!), and you can print your own badge (sponsored by Amazon Prime Video!) to wear as you sit in front of your screen at home. The Comic-Con homepage also will take you to an online Exhibit Hall, where there will be interactive exhibits and events offered by vendors.

There are literally hundreds of panels that will be rolled out like clockwork to the interested — with one key difference from typical in-person Comic-Cons: Most will be pre-recorded, and exclude the opportunity for any real-time fan interaction between creators and die-hards.

Without that element, will it all work? We’ll have to wait, stream, and see — and you can follow along with IndieWire’s coverage of Comic-Con @Home here. Check below for links to the highlights from the Comic-Con schedule (all times are Pacific Standard). Additional details and other events can be found on the event’s website.

Celebrating 80 Years of Will Eisner’s The Spirit: Will Eisner’s “The Spirit” was seen weekly by five million newspaper readers in the 1940s and 50s and has been continually in print for the 80 years since.

Imagination & Fun for Kids – The IDW Way!: Tune into this engaging exploration of comics and graphic novels for kids.

Little Fish: From Physical to Digital, Thriving and Growing: A look at the last year of Little Fish Comic Book Studio.

Adventures in Spanish Voice Acting: Estimates place the Latin American dubbing market at 450 million consumers, and Mexico produces 65 percent of it. As entertainment providers look to profit in that area, they face the challenge of publishing in neutral Spanish to serve all countries equally.

BOOM! Studios: Discover Yours: BOOM! Studios returns with exclusive news about some of the year’s biggest new books

Next: Coming to FOX in Fall 2020, “Next” arrives at [email protected] with a sneak peek of the thrilling opening scene of the propulsive, fact-based thriller about the emergence of a deadly, rogue artificial intelligence that combines pulse-pounding action with an examination of how technology is invading our lives and transforming us in ways we don’t yet understand.

Comic-Con Film School: This is a nuts and bolts class on how to make a movie for very little money using available video hardware and software.

Women On The Dark Side: Not all female artists/creators are about unicorns and glittery vampires and silly pseudo-bondage. Some women create truly dark and challenging art and content, with just a touch of humor and whimsy. Whether it’s comic books, novels, or art, these are the women who are creating content that connects with our deeper, darker side.

Aztec Depictions in Pop Culture: 500 Years After the Fall: The Aztec Empire fell to Spanish invaders 500 years ago. It’s a true story that shaped the world we live in and yet is still widely misunderstood. Panelists will talk about how they use elements of Mexican history in their stories and how our understanding of that history has evolved.

Comics about Motherhood and Reproductive Choice: Reproductive choice, women’s autonomy, and the challenges of parenthood and families are at the heart of memoirs by Lisa Wool-rim Sjoblom, Leslie Stein, and Teresa Wong.

Mega64 Panel In These Trying Times:The cast of Mega64.com celebrate their momentous 17th anniversary of making bizarre internet short films in San Diego by playing all of their favorite videos.

The Stars and Executive Producer of ABC’s “The Goldbergs”: The long-running and successful “The Goldbergs” is returning to ABC for a highly-anticipated eighth season. Stars Wendi McLendon-Covey, George Segal, Sean Giambrone, Hayley Orrantia, Troy Gentile, and Sam Lerner will be joined by executive producer Doug Robinson

Writing for TV: From First Draft to Getting Staffed: Panelists will discuss beginner’s mistakes, what they look for in a writer and what it takes for you to write a killer spec that will stand above the crowd.

Creating and Drawing the Action Comic Character with Monte Moore: Panel discussion and drawing demonstration with veteran comics industry artist Monte M. Moore on how to create unique comics characters of your own as well as drawing suggestions for creating dynamic comics action-oriented illustrations.

Don’t Tell Your Story, Show It!: Ever wonder how the really good books suck a reader in and hold their attention page after page? It might not be the characters, nor even the plot of the book. It’s could be the way in which the author writes that separates their story from the pack.. Join award-winning author and former lead fiction writer for Sony’s “EverQuest Next,” Maxwell Alexander Drake, as he presents his class “Don’t Tell Your Story, Show It!” During this class, you will gain insight into how to put your story together in a compelling way that will have your readers turning page after page to see what happens next.

Invader Zim Conquers Everything!: Celebrate “Invader Zim” with an exciting panel of authors and creators behind the most recent art books and comics from the hit series.

LGBTQ Comics and Popular Media for Young People: Comics and animation are universal mediums that have recently made huge leaps in presenting LGBTQ-inclusive stories and characters for young audiences. These groundbreaking successes have made unique creative opportunities for LGBTQ storytellers. A mix of animation and publishing storytellers discuss their projects and answer the questions: How do they approach LGBTQ content and characters for tweens & teens? What are the new and upcoming projects to watch for? And how do new LGBTQ creators find their voice and get their start?

Robotech: The Next Phase: The Harmony Gold team talks about exciting new Robotech merchandise and licenses, updates on the continuing “Robotech Remix” comic series, the live action “Robotech” film and their new partnership for future Robotech with Funimation

Inside The Vault of Ripley’s Most Exclusive Finds: Expanding on the legacy of explorer and world traveler, Robert Ripley, the Ripley’s Believe It or Not! team continues to acquire the most bizarre, iconic, and truly terrifying artifacts in history.

Making A Living Being Creative: A panel with AC Bradley, Jess Cuffe, and Lee Kohse on the ins and outs of working full time as a creator, how they broke into the industry, and advice for up and coming creatives.

The Art of Film and TV Posters: ASIFA-Hollywood and famed illustrators who have worked on entertainment art for the last 50 years will discuss their craft and what inspired them to pick up the baton and follow in the footsteps of their mentors.

The Writer’s Journey: Developing a Producer’s Mentality: As more and more content providers emerge, the demand for high-quality material is at an all-time high. Connect with this group of Hollywood screenwriters, producers and graphic novel creators as they discuss the best ways to get your original content to a hungry audience.

Wakanda, Forever! The Psychology Black Panther: A discussion on the psychological issues addressed in the “Black Panther” movie and comics, including topics such as micro-aggressions, cultural representation in media, and the power of love and empathetic leadership.

Careers in Geek Fashion: A discussion on different ways you can work in geek fashion, panelists’ career paths, how the current situation with the coronavirus has impacted the industry, and more. C

Christmas in July: The Psychology of Pop Culture and Christmas: What are the psychological aspects about our personality that influence returning year after year to those favorite holiday classics and the desire to experience new Christmas media?

Everyone’s a Critic: Being a Journalist in an Online Age: The past decade has seen an explosion in the scope of journalism-from the rise of citizen-journalism to blogging to vloggers, podcasters, and online-only news sources. This panel of writers and hosts will talk about the impact that 2020 has seen on film and streaming releases, impacts on fandom, and the companies that create them.

Indie Filmmaker’s Survival Guide: A conversation about great independent films on VOD and how indies can thrive during these challenging times.

The Grind NEVER stops, not even during a quarantine: This is a panel video to get you energized and ready to rise and grind. There is no better time than now to get yourself in the best position to produce creative work. The pandemic is no excuse, it is actually the catalyst to work even harder. Bryan “Kaiser” Tillman, a long time panelist at San Diego Comic-Con, best known for his Proper Pitching and Promoting Yourself panel, is giving you tips on how to crush your time during this pandemic.

Sun Jul 26 , 2020
Merchants selling their products speak inside a live stream booth during Alibaba’s annual Singles’ Day online shopping event – Qilai Shen /Bloomberg The shopping channel as formula has been largely unaltered since it emerged in the heady consumerism of Eighties America, hooking in thousands of viewers desperate for everything from […] 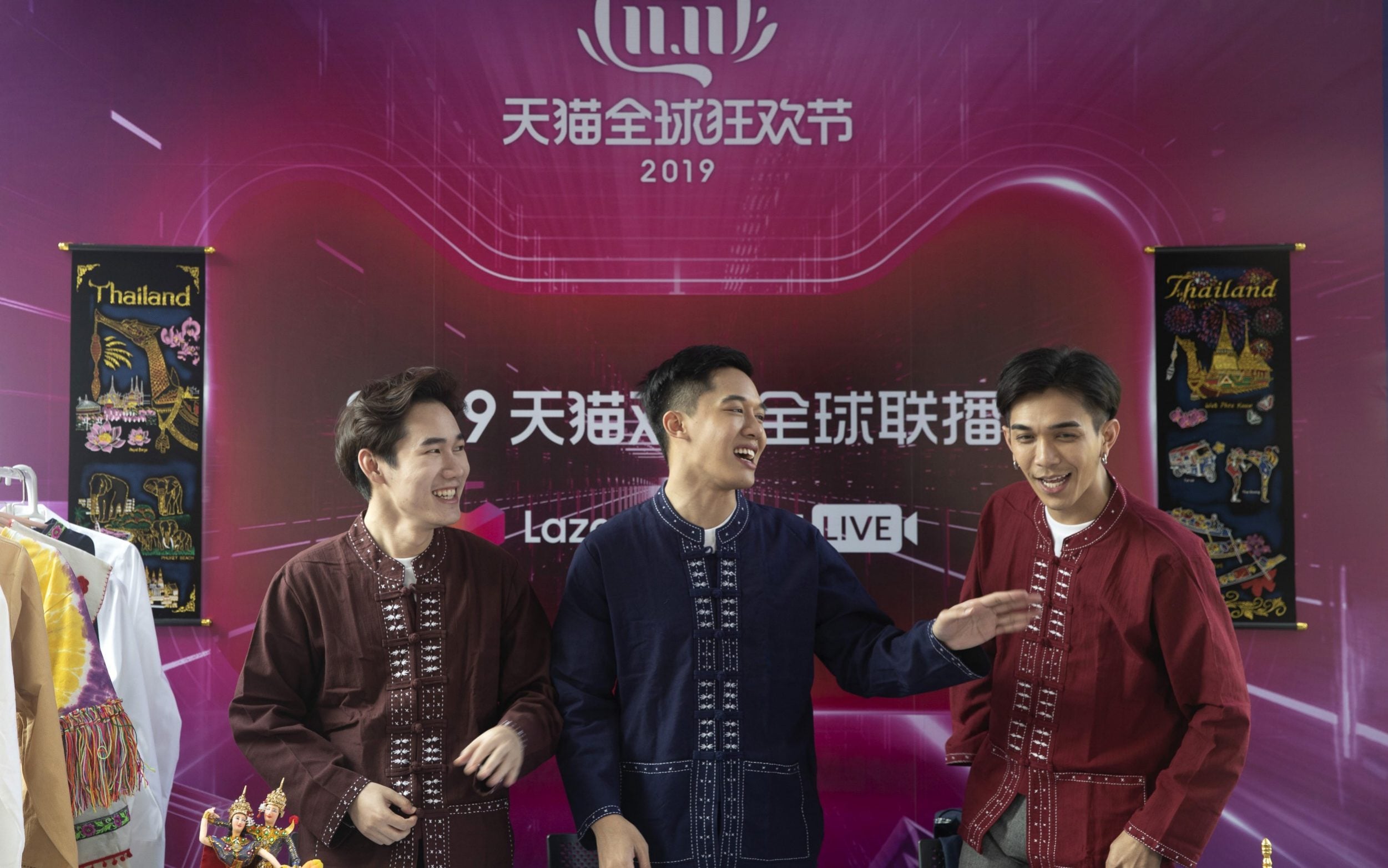