The new Bryton S800 flagship GPS cycling computer launched in May with a deep feature list, including impressive tech like voice search and the ability to keep you connected with other S800 users on your ride, even communicating with them through the device. I’ve been using one since launch, spending […]

The new Bryton S800 flagship GPS cycling computer launched in May with a deep feature list, including impressive tech like voice search and the ability to keep you connected with other S800 users on your ride, even communicating with them through the device.

I’ve been using one since launch, spending a lot of time playing with the navigation and routing features. I’ve ridden road, gravel and mountain bikes with it, out in the wide open, and under dense forest canopies. The only feature I haven’t been able to try was the group riding connectivity since, well, none of my friends have one.

Here’s a complete overview of (most of) the features, with actual weights and closeup details. 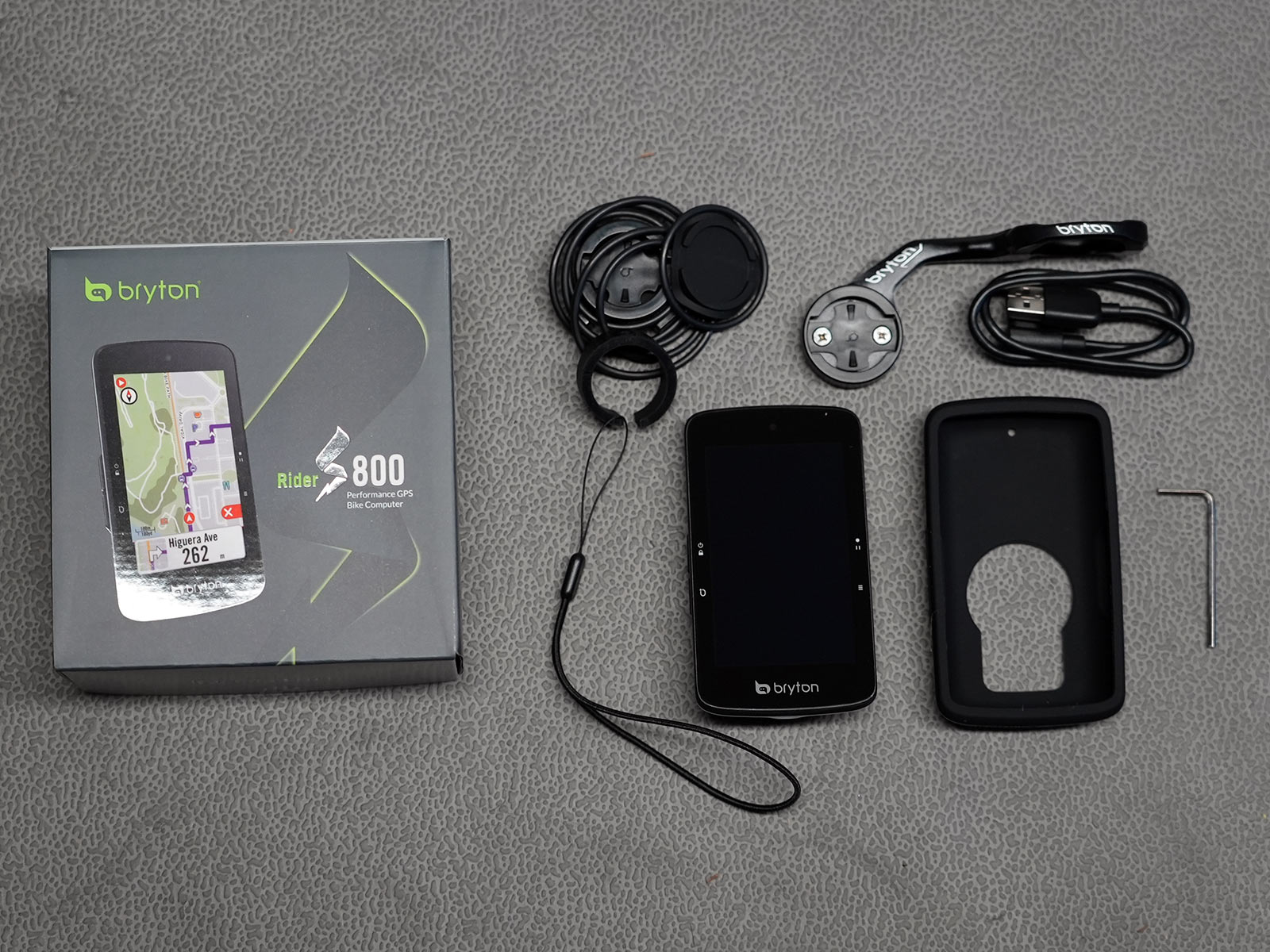 The S800 comes with a sleek alloy out-front handlebar mount with spacer adapter to fit 26mm to 31.8mm bars. You’ll need a different mount to put it on 35mm mountain bike bars.

It also comes with a strap-on bar/stem mount with plenty of bands, a Bungie-cord tether, USB-C charging cable, Allen wrench to install the mount, and a soft-touch rubber cover. 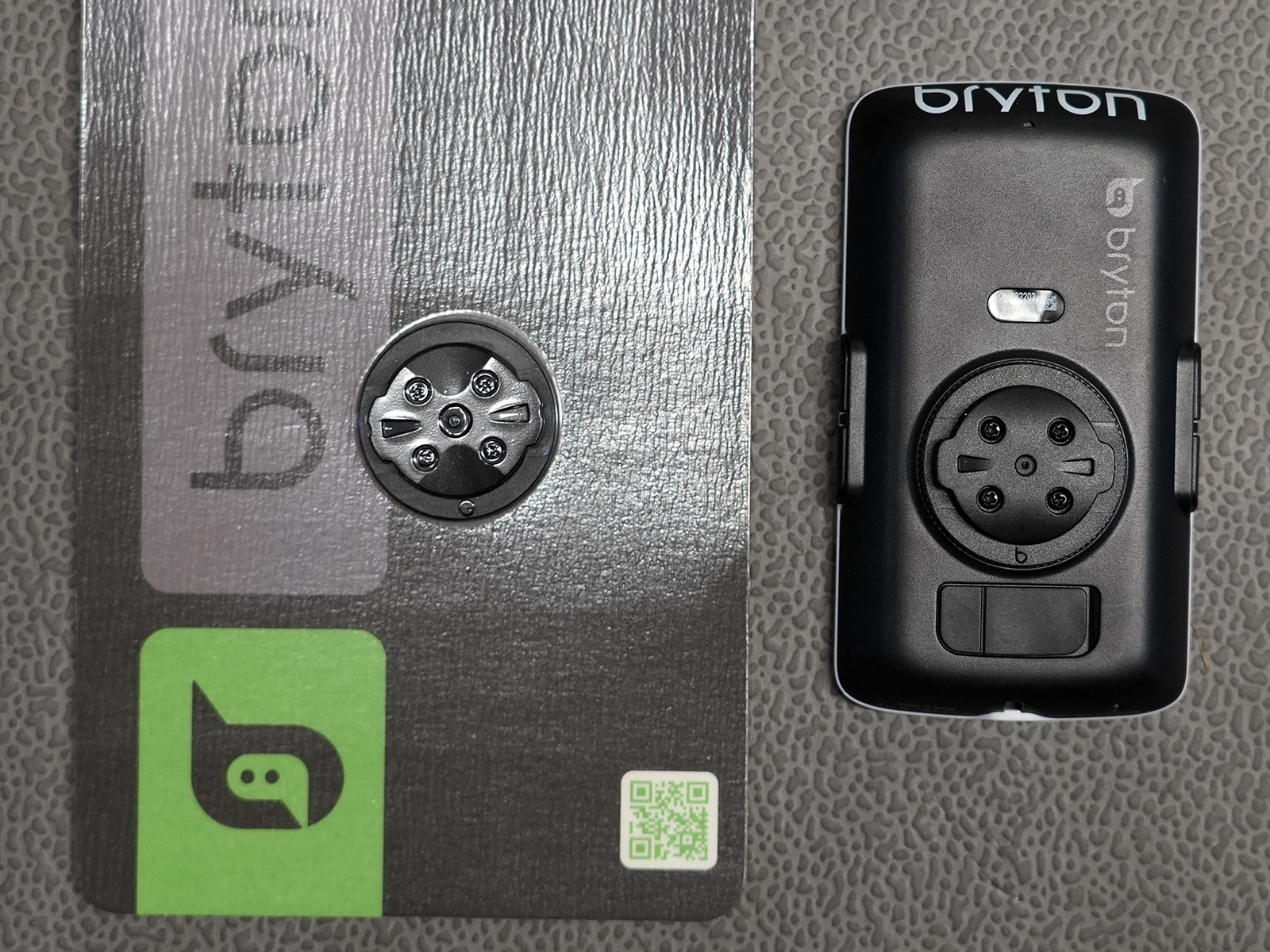 The attached mount puck that comes on the computer fits Bryton’s mounts, but they sell a Garmin mount adapter separately that fits any Garmin-compatible computer mount.

Just note that the Garmin mount puck has the small nub in the middle, so if you’re taking a Wahoo mount and rotating it, or have an older mount, you’ll want to drill a small hole in the middle of it. I went ahead and did this to the Bryton mount, too, so that I could just keep the Garmin puck on the computer. 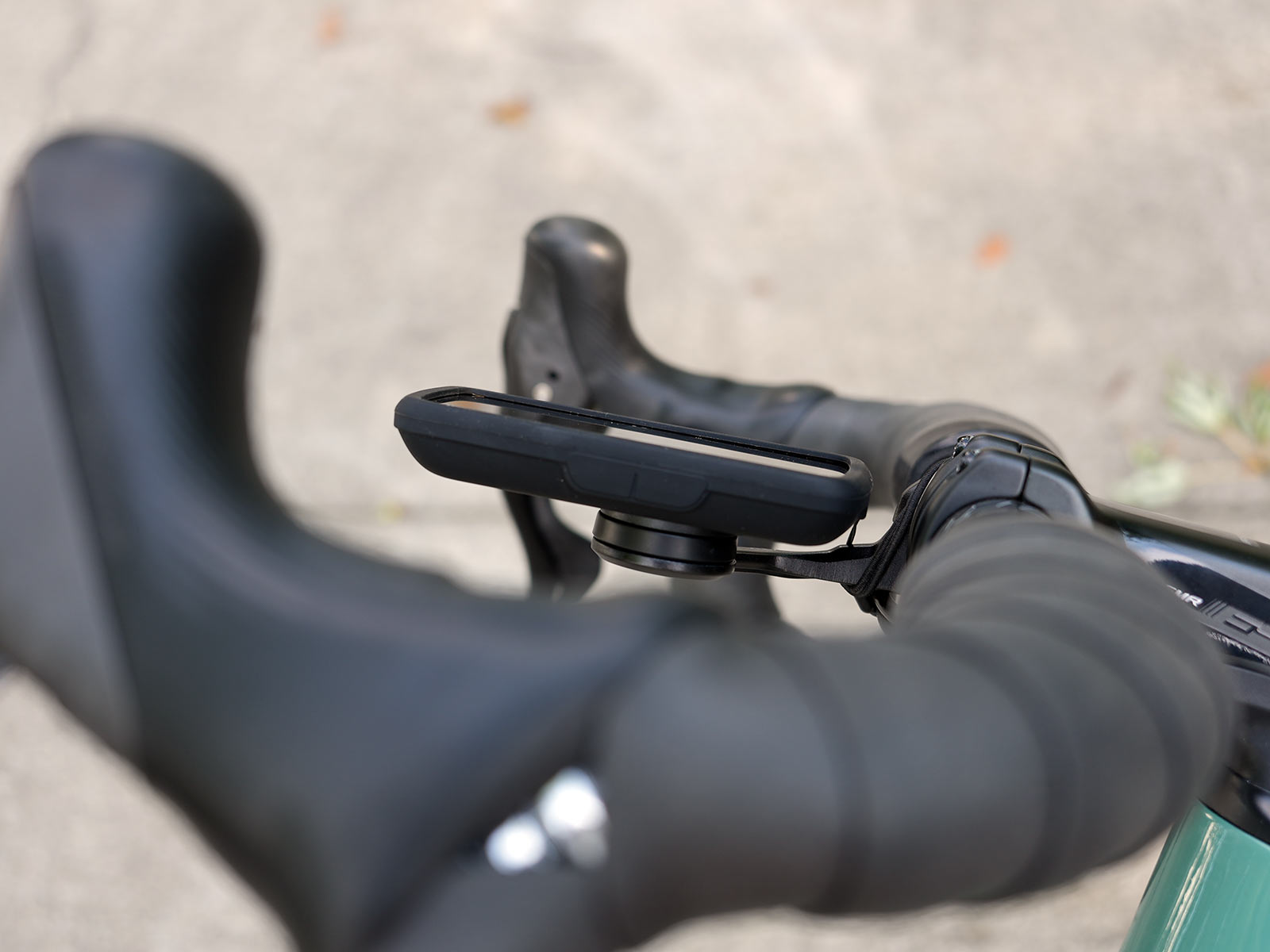 The Bryton S800 is their largest computer, but it’s still smaller than the biggest Garmins, and about comparable to the Hammerhead Karoo 2.

The buttons are easier to push without the rubber sleeve on it, but I do like the extra protection it provides. The power button needs to be held down for longer than you’d think to turn it on or off, but a quick press will lock and unlock the screen.

It’s thin, and appears much thinner without the sleeve on it, so while they make no aero claims, it’s probably at least as aero as most other models.

Download the Bryton Active app to setup your device, and keep it updated. It comes preloaded with three bike profiles – road, indoor, and MTB.

Each bike type can have its own setup and recognize it’s own set of accessories (power meter, HR, speed sensor, etc.), and you can set the different screens up for each bike type, too, which is a nice touch. Even better, you can change the screens while a ride is ongoing, so if you are on a ride and decide you’d like to see different metrics, just pull out your phone and change them.

You can set up a LOT of different screens per bike, or turn some off to keep it simple.

Graphically, I really liked Bryton’s Speed Ring (left) and Power Bar (center, with a better photo of it in action further down). You can select how many data points are shown per screen, but note that if you switch from 5 items to 6 items, whatever you set up for the 5-item screen won’t carry over to the 4- or 6-item screens…you’ll have to set each item-count page up individually.

The Map screen can have 1 or 2 data points only, so choose wisely. I’d recommend “Distance to Turn” as one of them if you’re using it for navigation, and I’ll explain why in a minute. 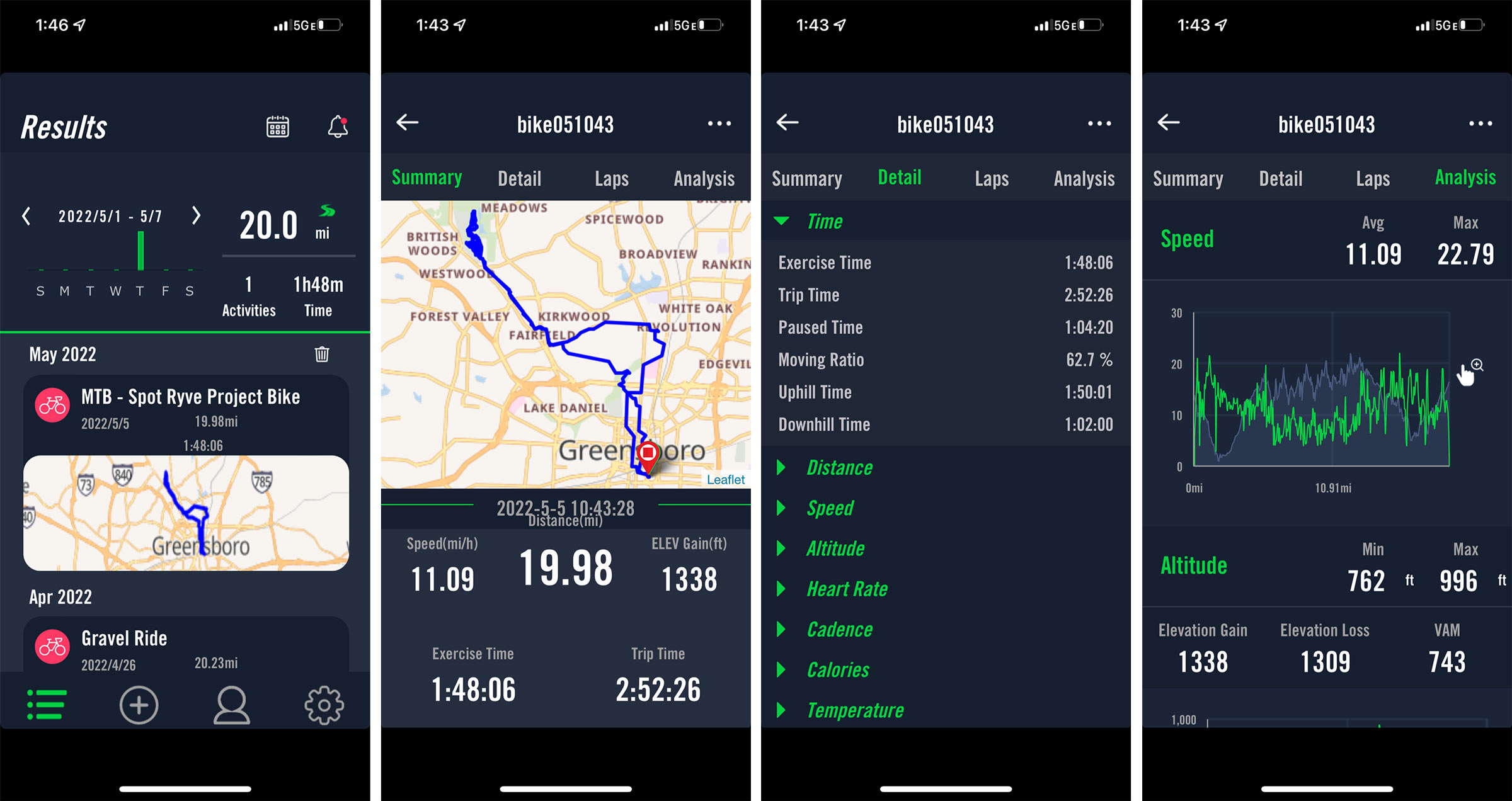 Following each ride, you’ll hit the top right button to pause the ride (or let it auto pause), then tap the “Pause” icon on the screen to stop and save (or delete) the ride.

The screenshots above show all of the detail and data it’s capturing, which is a lot. The Results show all of your recorded rides, click on any of them to see the Summary. Click on Detail to see a LOT of detail for almost every major metric, and Analysis helps put some of it into perspective.

If you’ve connected your Strava, Training Peaks, or other accounts to the app, it’ll push all of this data to those, too.

Bryton talks a lot about their navigation features, and there are some cool things the S800 can do. When paired via Bluetooth with your smartphone and the app is running, you can tap the Navigation button on the device’s home screen (swipe up from the bottom of the screen during a ride), then click the Microphone icon and say the destination you want it to search for.

It works… OK. Sometimes it would find no results, other times the results were of so-so usefulness.

The left screen (above) shows the results for “Ice Cream”. The middle screen shows results for “CVS Pharmacy”, and it needed me to add the word “Pharmacy” for it to work. I tried “Walgreens” and it came up blank. Imperfect as it may be, when it works, it saves you from having to stop and pull out your phone.

The map on the right shows the route to the second CVS result, and then I could just tap the green arrow to start my navigation. 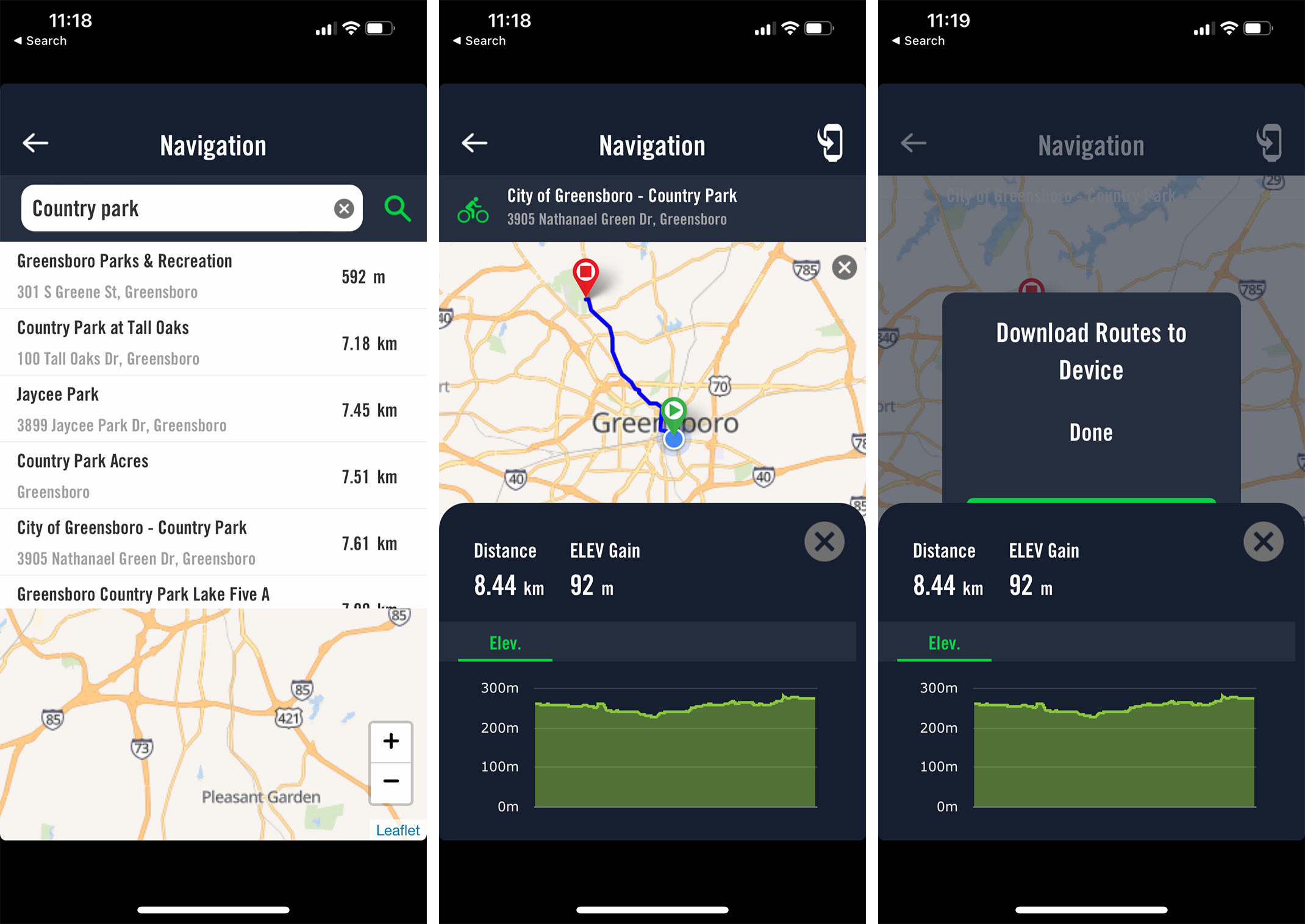 You can also type a destination into the app for more precise results, but here, too, more detail seemed to help. I typed in “Country Park” (the name of a local park) and rather than sort by relevancy, it sorts by proximity, so you may need to scroll some to find the destination you want.

The actual data provided for the destination is good, though, showing distance and an elevation map. But, it was routing me on some major roads rather than backroads or a nearby greenway that ends up at Country Park, and there are no alternative routes offered.

Unfortunately, when I clicked “Send to Device” it didn’t actually seem to send anything to the device. I found that on multiple occasions when I clicked Navigation on the device, it said I needed to quit a prior navigation route first, but there was no obvious way to do that (or obvious indication that I actually had a route going).

In Bryton’s defense, they continually push out updates for the device, and each one brings improvements. And they listen to feedback, so my hunch is its functionality will get smoother and better over time.

From the device, there are other ways to create routes:

The browser dashboard is lightly featured, but does include a basic route creation tool. And by basic, I mean very basic, but, and this is important, it’s still more than some other big-name cycling computer brands give you, and it’s free.

Above are two routes to the same spot, one where I selected “Road” as my bike type, and the other as “MTB”. In reality, the MTB routing was a much better, safer route, so it’s worth looking at the roads it creates and playing with the settings.

You can also build your own by dropping points along the map, but there’s no way to edit the points once you drop them, and no way to drop a new point midway along the route. So, it may take a few tries to get the route you want, but, again, it’s free. If you’re looking for more advanced route building, try Komoot or Ride With GPS.

One thing I’d like to see Bryton add is the ability to see my saved routes in the browser after creating them…they’ll show up in the app, but once you’ve saved them, you can’t pull them back up in the browser dashboard. And, at present, there’s no way to export those routes into sharable files, so your friends would need to be running an S800 also for them to share your route.

Once underway, the navigation is… OK.

The screen is bright and easy to see in direct sunlight, and the line to follow is clearly visible. But there are two things that could be better:

Shown above are the primary purple routing visual guide (left), a blue rerouting to get back on the purple main course (center), and an Off Route alert (right) that stays on screen until new turn instructions show up.

My hunch is it just needs a faster processor, or for a firmware update to help it prep alerts much further in advance. The visual aids for turns are…OK, too.

The S800 can track pretty much every GPS satellite network in the heavens, and one of the settings screens will even tell you how many it’s currently reading. On one check, it tallied 15. We talked to Bryton about how GPS tracking works for a recent Bikerumor Podcast if you’d like to learn more about that; it’s interesting.

Out in the open, the S800 does a fine job of pinpointing my location. On the trails and under trees, it seemed more likely to pause my ride than some other devices I’ve used, and tallied up less total distance than I actually did. My recommendation would be to use this primarily for road or gravel, or pair it to a speed or cadence sensor. 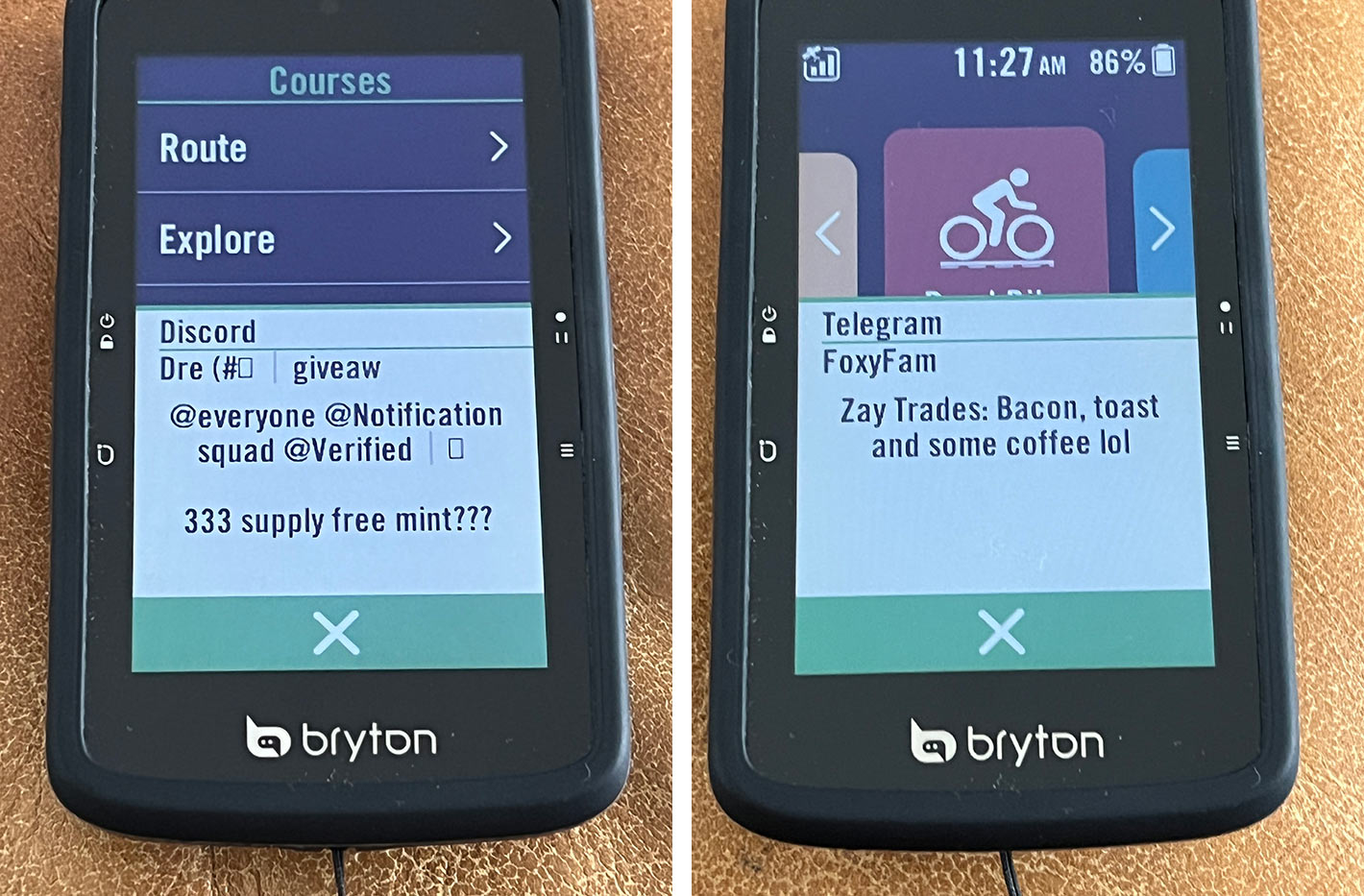 I’m used to seeing text and call noti’s, but the S800 will show you Twitter, Instagram, Telegram, Discord, too, and probably more. It’s enough to maybe put your phone on DND mode while riding, or just turn that setting off until an update allows you to select which apps it pays attention to. 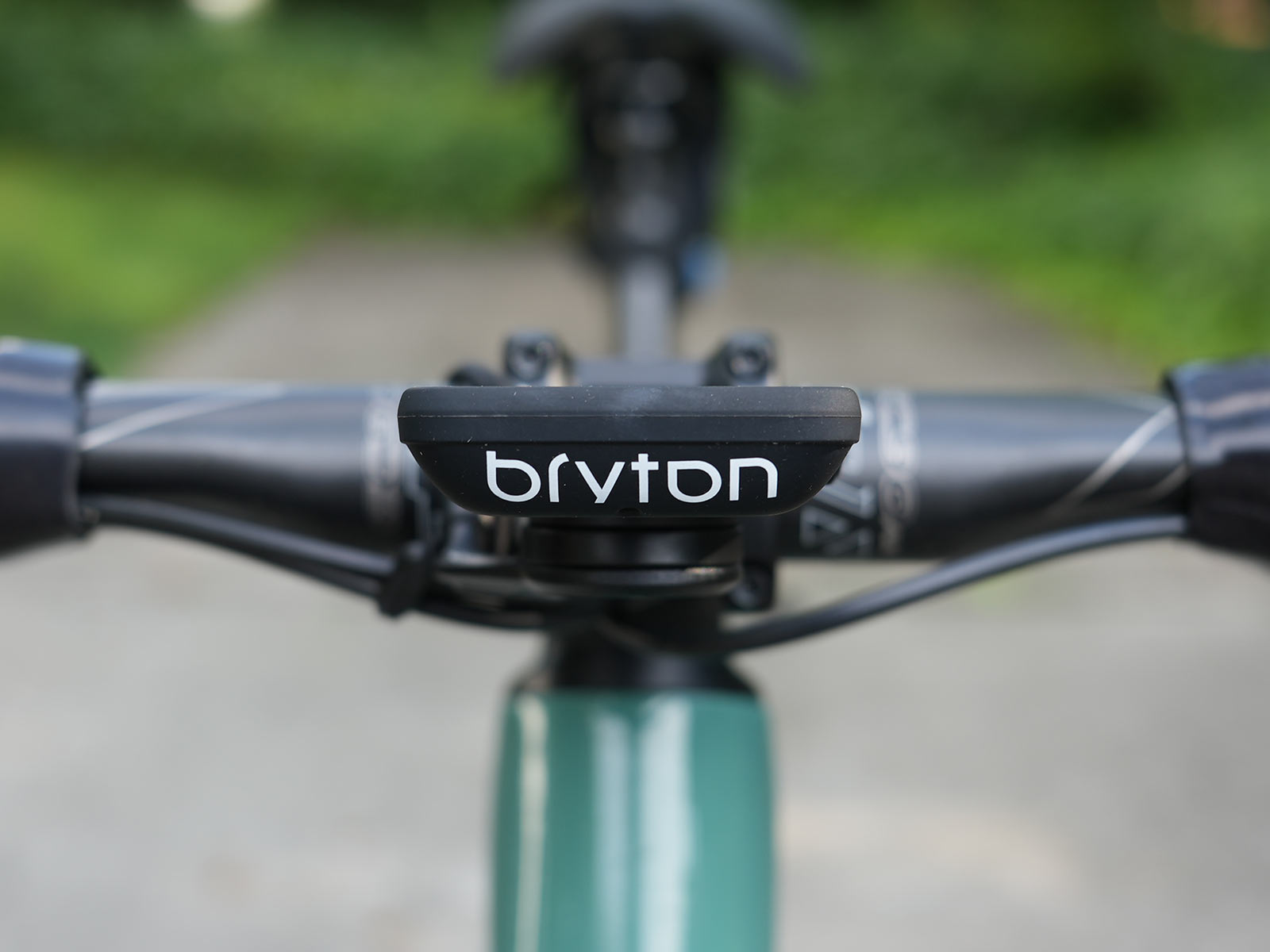 Despite a few quirks, the S800 has a lot to offer, especially if you typically ride with the same group and want to easily check in on everyone’s position. Unfortunately, that’s the key USP that I wasn’t able to test. 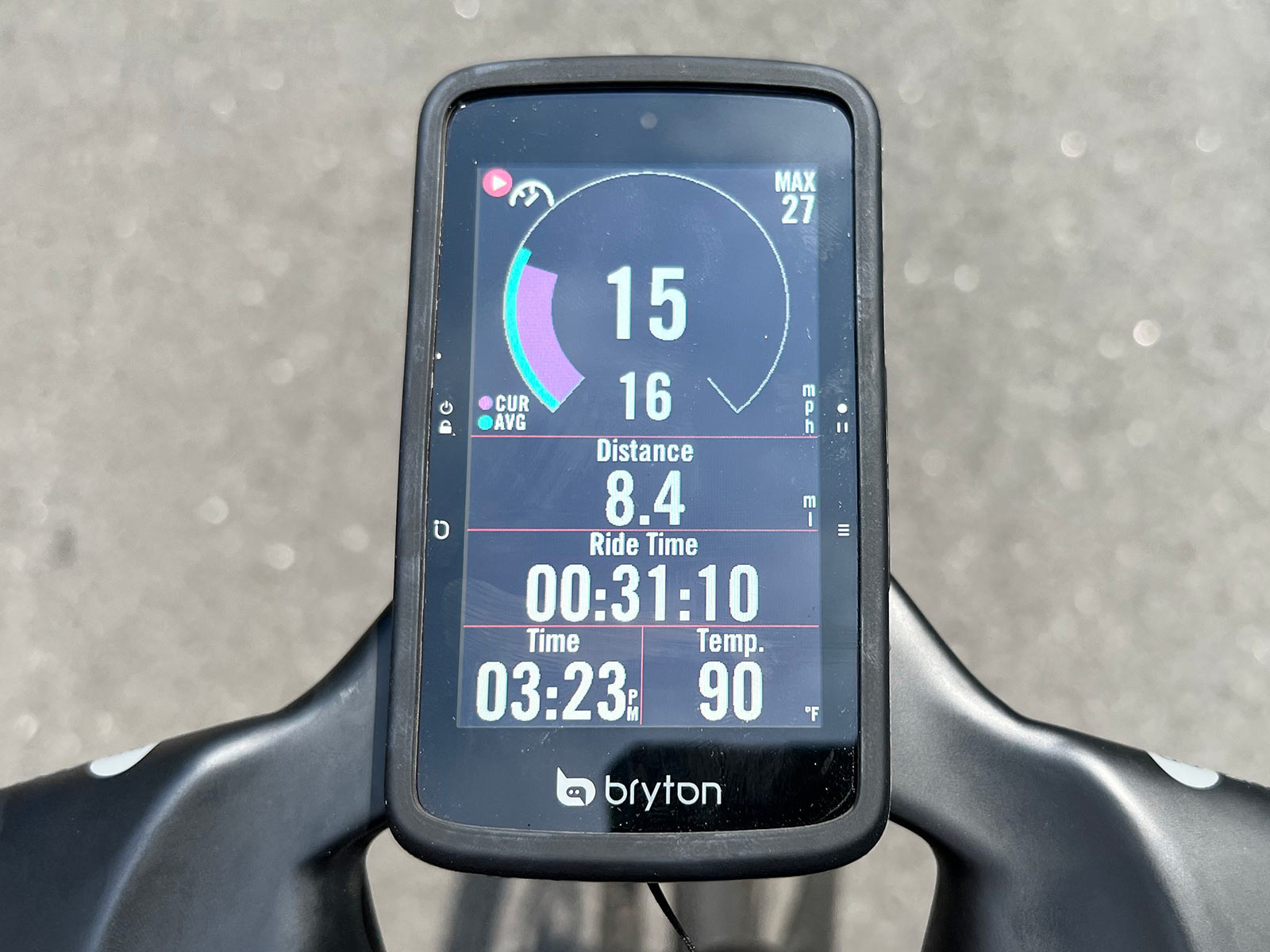 I really like the graphical options, which make data easy to see at a glance. The Speed Rings shown above can also be used for power, showing average and current for either of those metrics. 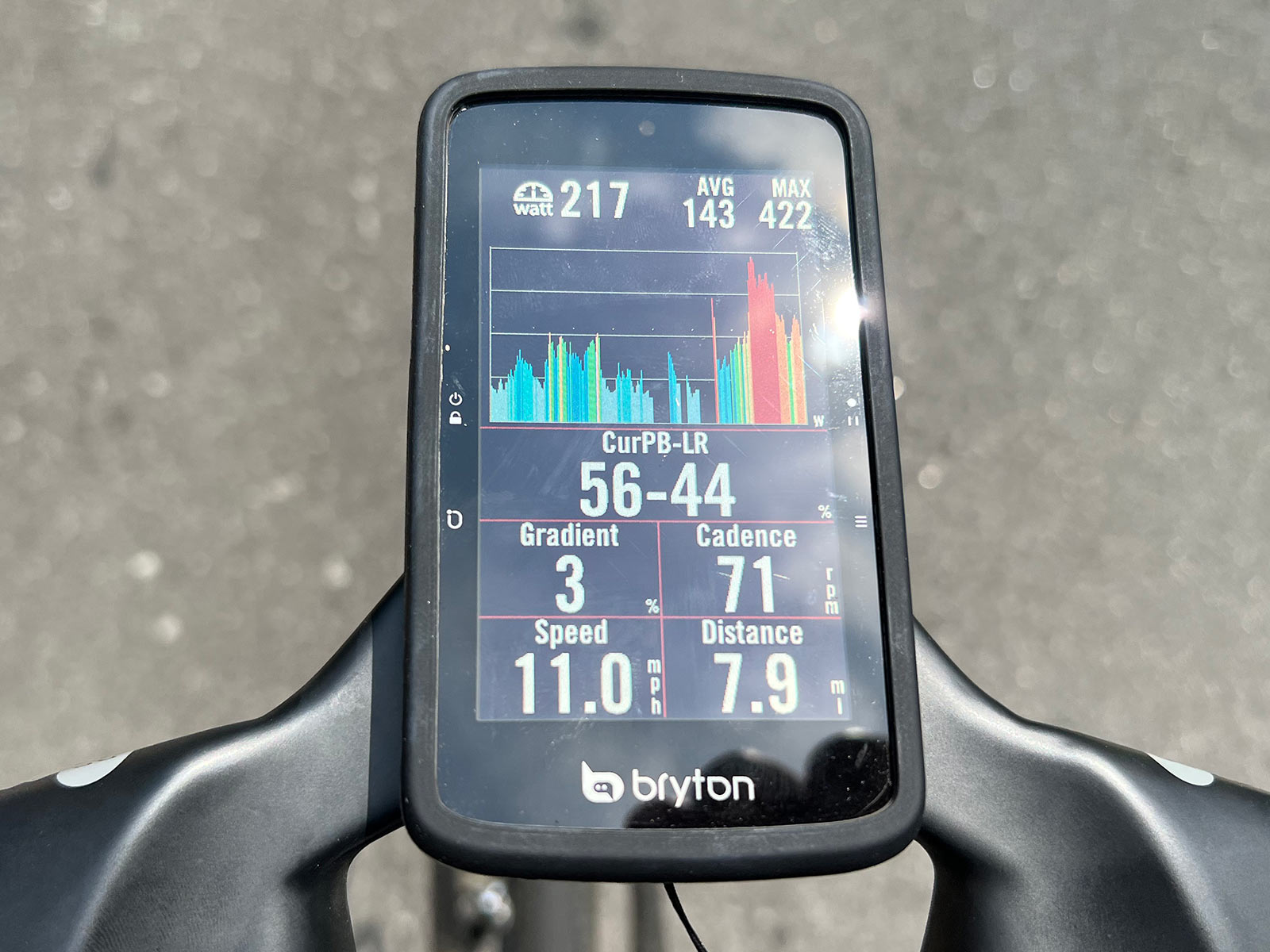 Or select the Bar display to see your power output in graph form. I preferred the Rings, but this one was nice for seeing how long I was redlining it up a climb, which makes it helpful for knowing when it might be time to back off a bit.

The S800 paired easily with various power meters and heart rate straps, too. It’ll even sync with Shimano’s D-Fly for gear indicators (but not SRAM AXS yet).

The screen is easy to read in bright light and automatically adjusts to ambient light. Battery life is excellent compared to its competition, and you can use it as a training partner to control your indoor smart trainer, too (Jordan tested this feature and liked it on the Rider 750, and it functions the same here).

Overall, the Bryton S800 is a solid training partner for data geeks with basic navigation skills that continue to improve. MSRP is $399, or bundle it with a speed, cadence, and HR sensors for $479. Check our launch coverage for all the tech specs and full feature list.

McHenry County resident scammed out of $120,000 after being contacted about computer virus support