Blachkovsky/Shutterstock There’s a long-standing belief that magnets are dangerous to have around electronics, but can they really damage your phone or computer? Why Are People Worried About Magnets? The concern about magnets and electronics isn’t founded on an outright myth, exactly, and is actually scientifically sound. Before you panic, however, […]

There’s a long-standing belief that magnets are dangerous to have around electronics, but can they really damage your phone or computer?

Why Are People Worried About Magnets?

The concern about magnets and electronics isn’t founded on an outright myth, exactly, and is actually scientifically sound. Before you panic, however, rest easy knowing that it is incredibly difficult and incredibly rare to damage electronics with a magnet.

The persistence of the magnets-damage-electronics idea is largely because people don’t understand it’s a case of the dose makes the poison, so to speak, not entirely unlike the confusion surrounding Wi-Fi safety.

The same concept is at play with magnets. The majority of magnets in your environment—fridge magnets, the magnetic latches on tablet cases, magnetic phone mounts, and so on—are very weak magnets. They’re just strong enough to do the job they are designed for and no stronger.

And then, on the opposite end of the magnetic strength spectrum, you have extremely powerful large neodymium magnets and electromagnets that can cause problems with electronic devices and even data loss in certain circumstances.

But, unless you work in an industrial, medical, or scientific setting where very powerful magnets are in use, and only then if you bring your devices near those magnets when they are operational, there is very little risk that you are going to damage your devices.

Still, just to put your mind at ease, let’s look at the specific risks of magnets around computers and phones.

Can Magnets Damage My PC or Laptop?

If your computer has a traditional magnetic hard drive (as opposed to a newer solid-state drive), there is always the potential for a very strong magnetic to damage the hard drive.

That potential is extremely small, however, and unless you happened to stick a large neodymium magnet right on the hard drive yourself or you left your laptop in an industrial degausser, you have nothing to worry about.

So if you found this article while panic-searching whether or not your kid putting fridge magnets or magnetic toys all over your laptop or PC case, don’t worry. The risk is nonexistent, and the strength of those small magnets isn’t even close to the strength of the magnets inside the hard drive already.

Further, if your laptop or desktop computer has only solid state drives, then there is no magnetic drive or magnetized data to damage in the first place.

Can Magnets Damage My Phone?

The answer to whether or not magnets can damage your phone is actually more nuanced than you would think.

At first glance, the answer would seem to be no, because no phones have magnetic media in them, hard drives or otherwise. And realistically, that answer is true in almost every instance.

Magnet car mounts, cases with magnets in them, and so on pose very little risk. In fact, some phones even have relatively large magnets built right into them, like the MagSafe magnetic ring in the back of modern iPhones.

There are, however, fringe cases where magnets can cause minor issues with phones, albeit not permanent damage. Phones use tiny magnets inside for various purposes, such as in the image stabilization arrays for the lenses. A magnetic case or mount with a magnet too close to the sensors can temporarily disable them.

You might buy a third-party lens kit for your phone that uses a magnetic mount to stick add-on-lenses over the stock lens, and then find that after you install it, the autofocus or image stabilization features act all wonky.

Both of those issues are almost always resolved immediately when the magnet is removed or simply adjusted to a new location on the phone so that the sensor is outside the strongest part of the magnetic field. If you want to avoid issues, look at the magnetic accessories made for your phone by the manufacturer or by a licensed partner. The strength and placement of the magnets in the accessories are carefully tuned to avoid issues with the phone model in question.

And as far as magnets in general go, the same advice about computers applies to phones: don’t subject your phone to extremely powerful magnets like those used to degauss hard drives.

Even though there’s no tiny hard drive in your phone you can erase, you don’t want to risk a very rare (but theoretically possible) outcome like magnetizing components inside the phone in a way that permanently throws off those delicate sensors.

Keep your electronics, laptops, phones, or other gear, away from industrial apparatus designed to wipe hard drives or other equally powerful magnets, however, and you’ll be fine.

Fitbits will soon lose the ability to sync with computers

Wed Aug 10 , 2022
Enlarge / The Fitbit Ionic currently lets you download music to the device. Valentina Palladino Fitbit owners who like to sync their fitness tracker with a computer to enable offline listening of downloaded music without a monthly fee will soon need to change their approach. As spotted by 9to5Google on […] 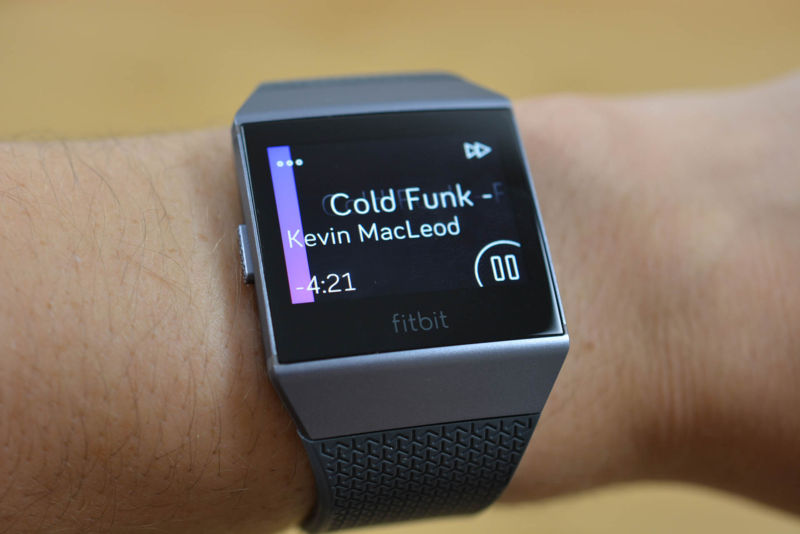