As the pandemic forced shutdowns worldwide, no aspect of the film industry faced a more immediate existential threat than the festival circuit. While mainstays from Cannes to Telluride chose not to hold events at all, others did the once-unthinkable: They migrated online. Now, the race is on to provide digital […]

As the pandemic forced shutdowns worldwide, no aspect of the film industry faced a more immediate existential threat than the festival circuit. While mainstays from Cannes to Telluride chose not to hold events at all, others did the once-unthinkable: They migrated online. Now, the race is on to provide digital services that support the unexpected era of the virtual film festival.

Enter Shift72, which counts Toronto, New York, and Sundance among its upcoming clients. The New Zealand-based company has provided secure press and industry screening platforms since 2008 and has now emerged as a leading company poised to tackle the challenge of creating online festivals. However, it’s hardly alone in an industry that has just gotten started and could be here for good.

In conversations with IndieWire, festival organizers discussed the frantic process of shopping for cost-effective platforms that could meet their needs on a tight schedule — especially when the market is evolving in real time. “There are new people coming online very day, from event platforms to OTT apps bubbling up,” said SXSW’s Jarod Neece, who facilitated the festival’s relationship to Shift72. “It’s really hard to make decisions at this point because every month there’s another solution we didn’t know about.”

Many sites proclaim high-caliber privacy standards. However, with 12 years as an end-to-end online video platform, Shift72 is equipped to act fast. When Copenhagen’s documentary festival CPH: DOX was forced to cancel physical screenings for its mid-March festival, Shift72 created a front-end platform and uploaded more than 140 films in less than 24 hours. SXSW, which has used the platform to power its press and industry library for years, uploaded several films from its program to a press and industry platform that same month.

No matter which platform enables an online festival, it can’t possibly replicate the experience of standing ovations, bidding wars, or after parties. However, they are essential for organizations eager to salvage sponsorships and deliver the programs they assembled for months. The demands are myriad: geo-blocking, privacy concerns, Zoom integration for Q&As. And even after physical festivals return, leaders say they intend to retain a robust virtual presence that can bring in new audiences. The post-pandemic festival scene will find the circuit redefining its relationship to audiences worldwide.

As more festivals recognized the looming pressure to cancel their physical editions, Shift72 found itself at the center of a booming business. The company has launched more than 100 virtual festivals since March, and signed several others. Its founders, distribution and marketing veteran David White and “Whale Rider” producer John Barnett, recently reported a 400 percent growth in business.

“We were really well positioned for this, because we’ve been primarily focused on building out a very strong transactional VOD solution,” White said in an interview. “We’ve been doing a lot of work with cinemas around reporting and all the nuances of transactional for 10 years. We had a platform we could rapidly deploy.” The company’s name references Buffalo, New York’s 72-seat Vitascope Theatre, which Thomas Edison opened in 1896.

“Festivals are realizing they can become year-round events,” he said. “Pre-COVID, they were strong, curated brands that brought new content into the market that might not otherwise make it there. But after a couple of weeks, they’re gone and you have to wait another year. We’re really excited about supporting their move into year-round entertainment brands.”

Many other companies, previously invested in other aspects of the festival relations business, are making steady progress in this emerging field. The five-year-old Cinesend first developed its relationship with festivals as a reliable source for DRM technology, which was used to replace the need for the physical shipping of festival submissions and awards screeners alike.

“We were in a very good position to pivot quickly to meet a virtual festival solution,” said Cinesend vice president Eric Rosset. “Patrons have been really happy. Festivals are tapping into a new type of audience that might not go to a cinema but are interested in this type of movie experience. We’re seeing a lot of hybrid models.”

Cinesend’s first pandemic-era client was the Cleveland International Film Festival, which went virtual in April. Since then, it has signed over 100 festivals, largely regional entities drawn to the user-friendly display setup. One of its biggest clients is Toronto’s Hot Docs, which used the service for its festival, an industry-only event, and year-round online programming. Upcoming clients include the Hamptons and Mill Valley festivals.

Over the summer, the Nantucket Film Festival settled on Cinesend based on the layout it could provide. “We had to look at the most turnkey option for our audience, which is on the older side,” said artistic director Basil Tsiokos. “We didn’t want to throw a lot of complicated technical things. It’s supposed to be a light summer festival, not a chore. It was like creating a Netflix landing page for us, which was pretty easy overall for our audience to navigate.”

The audience was fairly similar to the one that turns out for Nantucket each year. “Our engagement was still pretty much from our loyal base,” Tsikokos said. “We would do it differently if we went online next year, with more options to allow more people. Were the numbers what they would’ve been with a live festival? No, but we were happy that people were engaging with the films.”

However, no service may have closer ties to the needs of the festival galaxy than Eventive. Memphis-based filmmaker Iddo Patt, a board member of the Indie Memphis Film Festival, started the service five years ago with his teenage son Theo to improve its festival ticketing. Streamlining the process of buying passes and browsing the festival schedule attracted other festivals as clients. By the start of 2020, Eventive signed more than 250 festivals; since March, they’ve added about 10 festivals per week. “It’s been a really intense period,” Iddo Patt said. “For me, it’s all about accessibility and being able to connect people and audiences with films.”

It’s also one of the most cost-effective options, with a $975 activation fee that enables any festival to upload 10 features. More films, and the cost climbs. Bigger entities that want more advanced layouts, apps, and customer service may be more inclined to shell out for Shift72, where costs can range from $4,000 to over $100,000, depending on client needs. But Eventive, which has a 10-person staff out of Memphis, may be ideal for festivals that want someone who’s very familiar with the festival experience.

“We’re looking at ourselves as a technology company that’s creating delightful independent film experiences,” Patt said. Denver Film Society director of marketing and partnerships Kevin Smith said his organization went with Eventive because the company understood the festival’s needs without running the show. “The upfront costs were minimal, and we knew we had the right staff internally to help customize the system,” Smith said.

The virtual festival concept is still gaining traction. Some sales agents are wary of making films online for any open-ended period; distributors express concerns that an online premiere can impinge on VOD returns. They also know that the industry continues to evolve.

“This has fundamentally changed how we do business,” said Cinetic sales rep Jason Ishikawa. “However, we can’t just go to the festival and assume on certain buyers just showing up to the screening on the basis of the sheer presence of the movie. We do a lot of that work on the sales side to clear out a lane. Now we have to go to every buyer and come up with a sales strategy to screen it for them.”

Meanwhile, programmers are wary of asking audiences to tune into streams at a specific time, and the platforms have helped them push back on distributor’s preferences for narrow windows. “We have to keep in mind that how we view in the home is not the same as being at the screening,” White said. “People want to be able to pause. If we take too many of those elements away, there will be backlash from usability perspective.”

Platforms are also learning about the range of security and geographical demands. Apple requires a different forensic watermark than Neon, while TIFF has been engaged in negotiations to make its film premieres available in Ontario even as an international group of press and industry attendees access most of the program online. There is also the challenge of virtual crowds and the need to limit attendance. “In a traditional streaming environment, you’d never want to limit the number of people who watch a film,” said Shift72 marketing manager Mathew Joubert.

While it’s one thing to marvel at a crowded room or cringe at a half-empty house, virtual festival platforms allow their clients to see much more complex data, including how long someone watched a film before turning it off. It brings a whole new anxiety to the idea of the walkout, but also it lets festivals track their most engaged audiences. “I think it’s a big opportunity to bring loyalty into the festival space. How do you reward that in the home?” White said. “A lot of people think it’ll dilute the market but it actually improves both sides, the physical and the digital.”

No major festival is seeking exclusively online solutions, but White said Shift72 has already been meeting with many of the major festivals about 2021 strategies. “I’ve been really impressed with how nimble and prepared to adapt these large organizations are,” he said. “They’ve done a great job of embracing this. The feedback was it was always on their radar to have a digital component to their festivals.”

For now, their clients just want to get the films out there. “This year round it’ll be a nice streaming experience,” White said. “It’ll be exciting to see where they take it next year.” Asked about the other players in the field, he demurred. “We’ve been too busy to look at the competition,” he said. “We’ll look back in a couple of months.”

Fri Aug 14 , 2020
From Seventeen Any other year, incoming college freshmen would be filled with giddy anticipation at this very moment, counting down the weeks until they get to step on to their awaiting campus. They’d be making a packing list, trying to decide whether or not their beloved stuffed animal should make […] 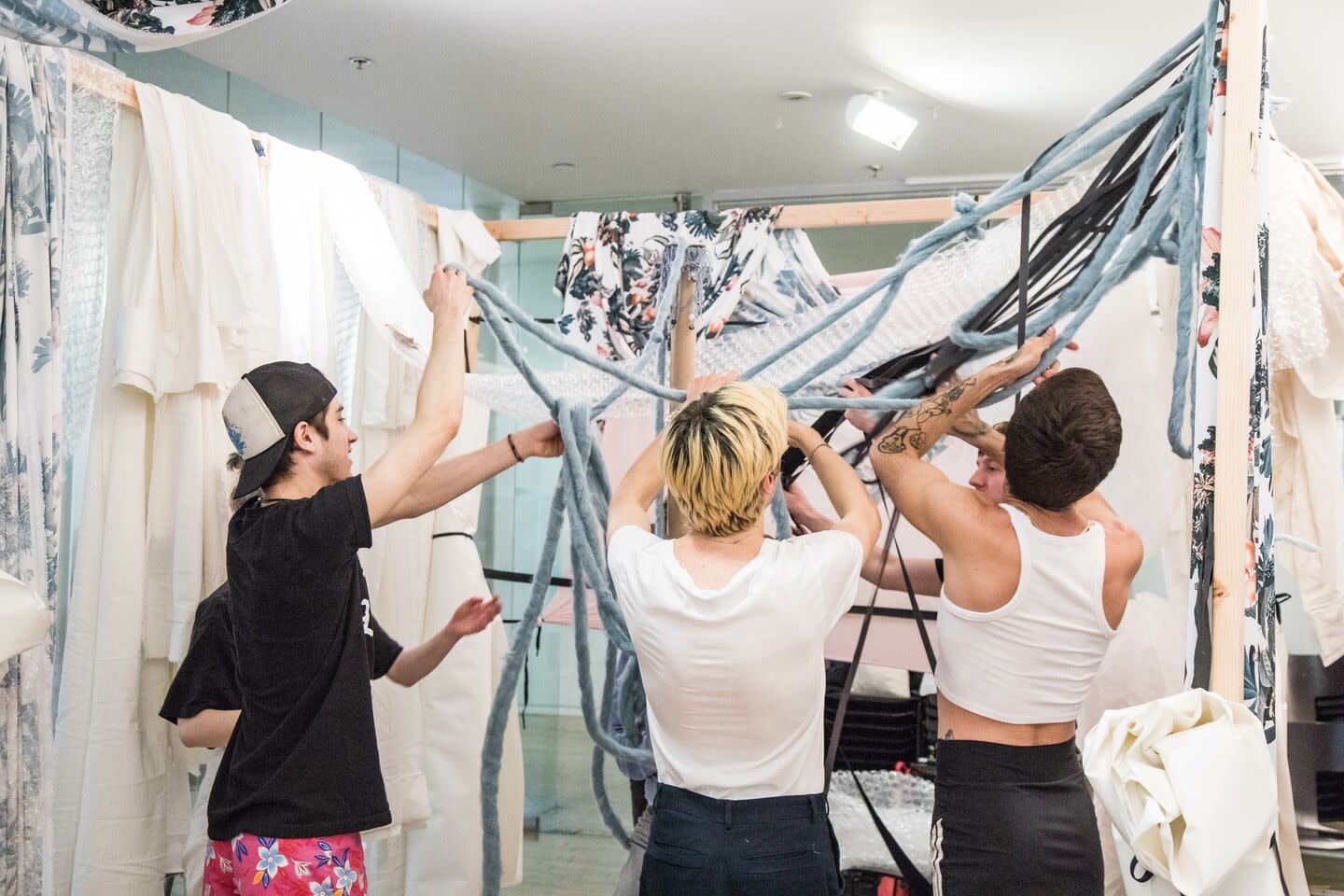