Penny stocks are notoriously risky investments because they’re often speculative in nature. With that said, investors who are willing to take on a relatively high level of risk could find them to be a good way to play the current market uncertainty. With the novel coronavirus still looming and equity prices climbing ever higher, looking for penny stocks to buy could be a good way to find value.

Historical data shows that penny stocks receive less attention from investors, are oftentimes undervalued and underpriced, and therefore poised to deliver superior returns. When superior returns materialize, analysts and other investors notice them, but [the] attention is not sustained for a long time.

That phenomenon has become apparent in the current climate as investors using no-fee platforms take a notable interest in penny stocks. Gonzalez warns that come autumn, investors may start to favor other types of investments to combat a market downturn.

Especially in crisis times, it is likely that investors will try to offset potential market downturns in Fall with alternatives other than penny stocks, such as cryptocurrencies this year. This sector experienced a run-up from February to April, in part because of cryptocurrencies being considered “digital gold” and the conversations in DC about a future Fedcoin.

Penny stocks aren’t for everyone — especially not those who want to buy stocks and hold on to them forever. Instead, penny stocks are best bought by those who can take on a relatively large degree of risk and are willing to keep a close eye on market developments.

With that in mind, here’s a look at a handful of penny stocks that are worth considering.

ExpresSpa gained a ton of attention in June when the firm announced plans to pivot its in-airport spa business into coronavirus testing sites. While the decision to shift focus toward the pandemic sounds like a good plan, it’s worth noting that in the longer term, it’s a terrible business plan.

Not only will the firm struggle because of its lack of experience in the medical space, but the company is also pushing a paid service that others, like CVS Health (NYSE:CVS) and government agencies, are offering for free.

Still, XSPA stock has been a penny stock to watch because if the company is able to pull off the transition, it’s genius. So, while I wouldn’t buy XSPA as a long-term investor, it makes sense as a speculative play.

Recent XpresSpa job postings suggest the firm may be about to announce a new testing location in Newark, representing a major win for its expansion plans. With investors already keeping a close eye on XSPA, that kind of news could cause another jump upward.

FRSX stock is another pandemic play, but unlike XSPA, this firm does have a great deal of long-term potential. Foresight has been on a tear since June after it announced that it was creating a way to screen for coronavirus symptoms in large groups. It recently began a pilot program for its mass screening technology, which uses thermal camera technology to search for potentially infected individuals.

It goes without saying that if FRSX is able to obtain a patent for its screening technology, it could be a huge leap forward. Plus, if its pilot program is deemed successful, the news could push the stock higher, especially as new coronavirus cases are expected to surge in the fall.

There are a lot of drugmakers working on treatments and vaccines that have become enticing bets for speculative investors. But there’s one penny stock worth considering because of its unique product that could soon be in everyone’s Amazon shopping cart.

NovaBay recently revealed that its disinfectant, Avenova, was shown to be effective in killing the strain of coronavirus that caused the global pandemic. The test results have been sent to the EPA in hopes that Avenova will eventually make its way onto the organization’s list of disinfectants approved to kill SARS-CoV-2.

What makes NBY stock a compelling buy is the uniqueness of Avenova, which has been on the market for some time as an eye treatment. The product is gentle enough to be used on the skin, including the area around your eyes and nose.

Not only will that make the use case for Avenova much stronger, but it will also make it a good option as a disinfectant for vulnerable groups like young children. Harsh chemicals being used to clean toys and other surfaces can be dangerous for babies, but a more gentle solution could prove popular in the fight against the pandemic.

With school reopenings postponed in some states and many medical experts warning of a dangerous second-wave of coronavirus cases, educational technology is a field that can’t be overlooked.

HHT stock is a unique play in that space for a few reasons. First, there’s the fact that the firm is headquartered in China, where the government imposed some of the strictest lockdown rules when the virus broke out. For that reason, it’s safe to assume that if a second wave happens, Chinese children will be out of school immediately.

The second reason is that the firm appears to be finding a way to create some sort of an Amazon of Ed-tech. It recently partnered with Morremoon in an effort to improve the digital animation aspect of its services. The partnership, HHT says, is the start of a new kind of digital education platform that will offer online classes as well as supplementary products. It aims to merge online education with online shopping.

This could become an effective way of creating a quality homeschool environment in which parents have access to a greater variety of resources to supplement the online classrooms. Now imagine the ad revenue and sponsorship deals Color Star could capitalize on if online learning sticks around.

Traditional Edtech isn’t the only place to go looking for value in a world plagued with coronavirus. XELA stock is another one to keep on your radar as its technology will eliminate the need for person-to-person contact within brick-and-mortar schools.

The firm says its Intelligent Lockers will make it safer for both students and faculty returning to school. XELA tweeted that the lockers could be used on college campuses in order to provide a contact-less mailroom experience.

Excela is more than just a locker-maker though. The firm also offers document scanning technology as well as a confirmation of Payee Platform through a partnership with Co-operative Bank.

If there were one stock that capitalizes on every bit of market uncertainty, it would be DGLY stock. The firm is best known for its body cameras, but it also offers non-contact temperature scanning technology.

When protests calling for police reform spread across the country, Digital Ally’s body cams were in focus as more counties made wearing the devices mandatory. Concerns about accountability for the police aren’t going anywhere, and for now, body cams are the fast solution.

But DGLY’s temperature scanners are the reason the stock is seeing investor attention right now. TrustThink Products just ordered 500 of its temperature screening devices as many U.S. states try to keep their economies open despite surging coronavirus cases. In the absence of a vaccine, temperature checks are one of the few ways businesses can try to make their locations safe for customers.

DGLY’s temperature scanner is more than just a thermometer, though. It can be used to control access into a facility based on whether or not a person’s temperature is elevated. It also has facial recognition technology making it useful for security as well.

It’s impossible to talk about penny stocks without including at least one potential vaccine maker. Choosing the winning biotech stock in the race to develop a Covid-19 vaccine is inherently risky because not only are there a lot of potential contenders, but there’s also a chance that an effective vaccine isn’t possible.

However, if you do pick the right stock, it could be a huge money-maker. IBIO stock looks like it could be a potential winner in the vaccine race. Not only is iBio trialing two vaccine candidates, but they’re two of only a handful that require only one dose.

iBio was chosen by IBM (NYSE:IBM) to use the Watson supercomputer free of charge to develop its coronavirus vaccine, marking a huge leap forward for IBIO stock. That’s because not only does that add a layer of confidence, but it also means the firm will have added resources to push a successful vaccine out faster than competitors without access to Watson’s technology.

In the near-term, IBIO stock looks overdue for a boost as the firm hasn’t said much regarding progress on its vaccines. When the company does come out with (hopefully) positive data, it will send iBio stock higher. Longer-term, iBio is a risky bet because of its shaky financials and dependence on a coronavirus vaccine.

Laura Hoy has a finance degree from Duquesne University and has been writing about financial markets for the past eight years. Her work can be seen in a variety of publications including InvestorPlace, Benzinga, Yahoo Finance and CCN. As of this writing, she did not hold a position in any of the aforementioned securities.

The post 7 Penny Stocks for the Valiant Investor appeared first on InvestorPlace.

Do lawmakers understand Google and Facebook enough to regulate them?

Sun Aug 2 , 2020
Many of us have had the feeling that technology, which continues to change at an ever-dizzying pace, may be leaving us behind. That was embodied this past week during a Congressional hearing, nominally convened to investigate antitrust concerns of four big tech titans: Amazon, Apple, Facebook and Google. While the five-and-a-half-hour inquiry touched on […] 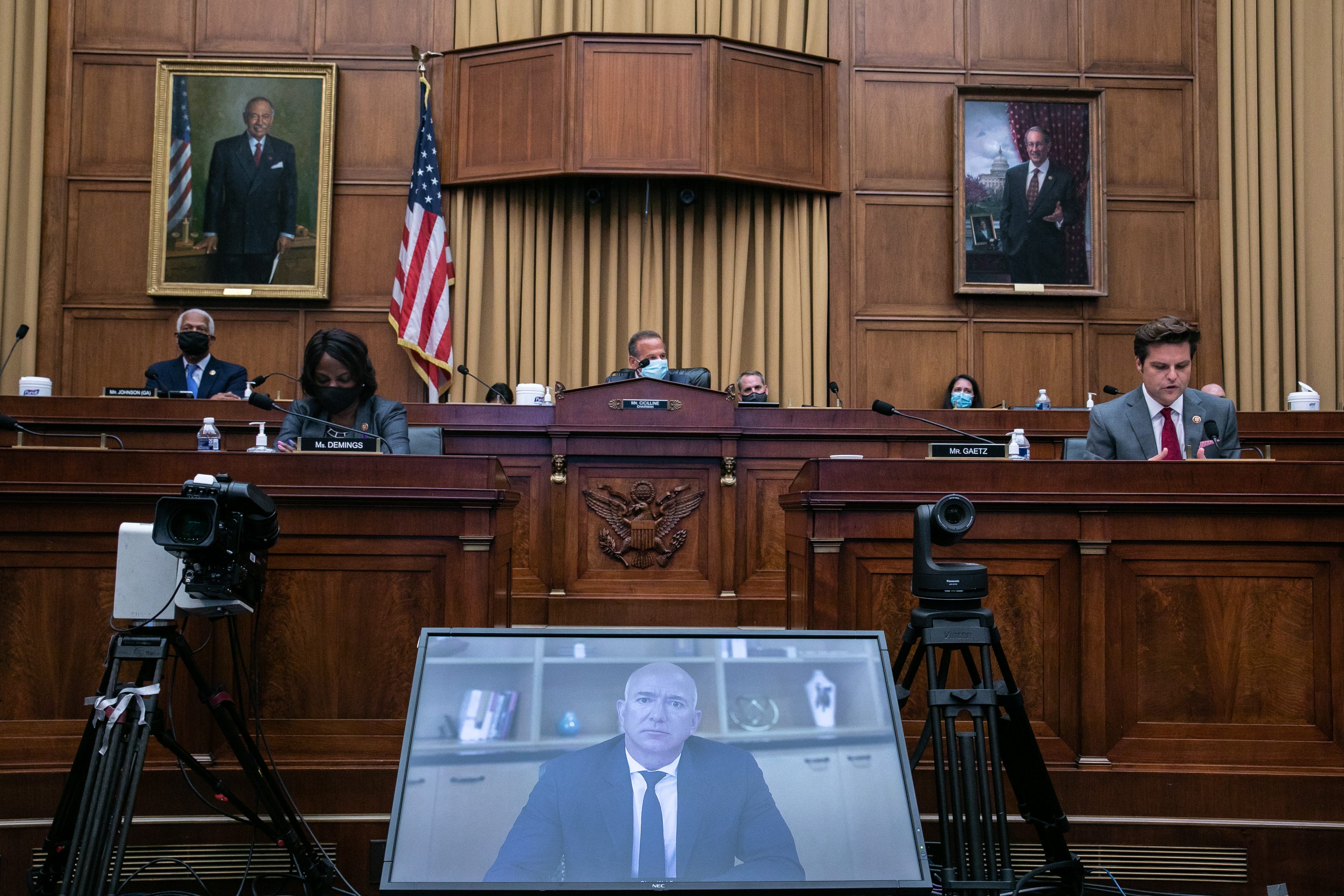